A jury of influential motoring writers from 12 Eastern European countries has voted the Kia Rio winner of the prestigious “Autobest 2006” award for being “the new car most suitable for the needs of the population of the region, thoroughly modern with new technology and affordable to buy.”

Announcing the 2006 winner, Autobest Chairman Mr. Dan Vardie commented, “This year’s competition was very tight, and the Kia Rio emerged as the winner thanks to its fantastic value for money, great versatility, and the important strides made by Kia in developing an excellent dealer network across all of Europe.”

With a total score of 706 points, the Kia Rio comfortably surpassed its shortlisted contenders — the Ford Focus (659), Renault Clio (599), Chevrolet Spark (467; known as Matiz in some markets) and Suzuki Swift (449) — to claim the crown. The 2006 shortlist of finalists was selected after each jury member proposed five all-new models they regarded as the “best” cars of the year that cost less than 15,000 euro.

“The Autobest 2006 award for the Kia Rio is a splendid achievement for the growing Kia brand,” commented Jean-Charles Lievens, Senior Vice President Kia Motors Europe. “Jury members from the emerging Eastern European countries have given our B-Segment newcomer the strongest possible endorsement as the ideal car for motorists in this region.” 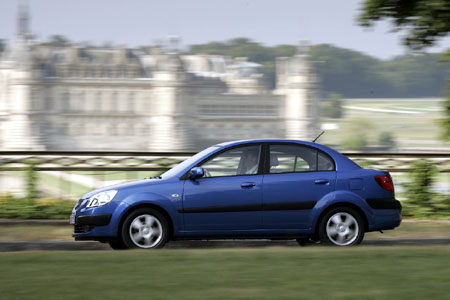 Yong-Hwan Kim, Senior Executive Vice-President and COO of Kia Motors Corporation stated, “This award marks the first time an Asian car maker has been awarded a car of the year distinction by Autobest in the emerging markets of Europe, which clearly demonstrates that Kia is in tune with the needs of the European customers and committed to expansion throughout our largest overseas market.”

Established in 2001, the “Autobest Among Emerging Markets” group is the leading motoring organization in Central and Eastern Europe. The 12 countries taking part in Autobest are Bulgaria, Croatia, Cyprus, Czech Republic, Macedonia, Romania, Poland, Serbia, Slovakia, Slovenia, Turkey and Ukraine. These countries represent a total market of more than 200 million people, and the Autobest program is now considered the second-largest independent annual European motoring assessment activity after the European Car of the Year (COTY) award.

Each judge from the 12-strong Autobest jury has up to 240 points they can allocate across 13 “criteria zones” under which the candidate cars are assessed. The cars are rated for Interior, Exterior, Handling, Dynamics, Comfort, Technology, Versatility, Safety, Fuel Economy, Environment, Spare Parts, Distributors and Price.