Perhaps I should be the last person to write this piece. I mean I cut my 4WD teeth on a very battered but dependable Mk1 Land Rover. And back in 1987 when I spent several weeks driving a base model Pajero I thought of it as a car for sissies. So maybe I’m not the perfect choice to write something about the Nissan Murano because, well, it’s not really an off road vehicle at all. 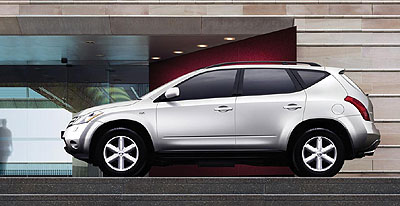 I mean what self-respecting 4WD only has one gear? Where’s the fun in driving a vehicle that has only one gear even if it is the right gear for that precise point in time?

Even using the word “gear” is probably not quite right because the Murano comes equipped with a continuously variable transmission (CVT) and that means that it is always in the right gear for the conditions.

The CVT is a stepless transmission controlled by an onboard computer and it gives an infinite number of gear ratios. But just in case the driver happens to have Luddite tendencies Nissan have also provided a gear selector that the driver can use to select from one of a number of pre-programmed gear ratios.

When the vehicle is being driven in full auto mode the drive operates as 2WD only with power going to the front wheels but as soon as any wheel spin is detected the vehicle automatically switches to 4WD. And if anyone is silly enough to believe that this vehicle should be taken off-road then the driver can lock in 4WD. 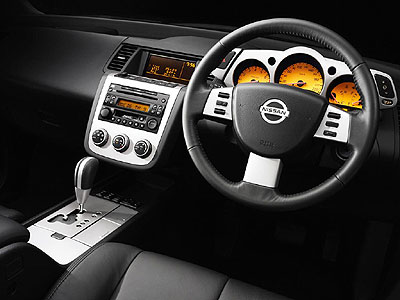 But even there the responsibility of driving the Murano is taken from the driver because even with the 4WD locked on the vehicle will automatically switch back to 2WD should the vehicle speed exceed 30kph.

The Murano is powered by a 3.5 litre V6; the same V6 that powers the Maxima and 350Z and the suspension is very similar to that used in those on-road vehicles too. In fact the Murano also shares its frame with the Maxima.

The result is a big vehicle that is really designed for sealed roads. It rides and handles well and seats 4 adults in comfort and carries their luggage as well. On a trip you can expect to get around 11 litres per 100km but around town that figure is going to worse.

The starting price for this Soccer Mom’s vehicle is $51,990 and you can option it up from there up to around $56,990 for the top of the range Ti model.

Based on figures from the US where the Murano has been selling for the last 2 years, and has now sold over 327,000 units, Nissan expect to sell as many as 300 a month here in Australia.

Hmmmm, I still can’t come to grips with a vehicle like this. Whoever heard of an off-road vehicle that had a foot operated parking brake?