Skip to content
9 Comments on Ford ZephyrPosted in Ford Australia, Vintage and Veteran By Stuart LiveseyPosted on January 8, 2006September 17, 2018 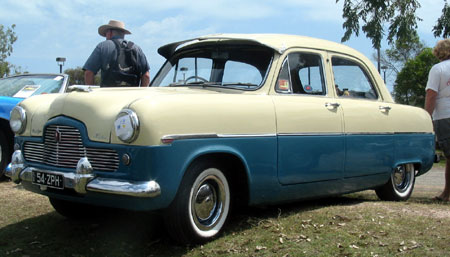 In case you don’t recognise the name or the image let me introduce you to the 1954 Ford Zephyr Mk1 sedan. The Ford Zephyr was an English car manufactured between 1951 and 1955. The engine for this car was a specially designed 6 cylinder overhead valve engine with a capacity of 2262cc.

In 1954 Ford introduced an upmarket version of the Zephyr known as the Zodiac and the car shown in the photo is thought to be one of those luxury vehicles. Of course, luxury was a relative term back in 1954 and by today’s standards the Zodiac would be considered somewhat spartan.

Arm rests and a

The Zephyr also came as a station wagon.

The Zephyrs were quite popular here in Australia where they competed directly with the FJ Holden.

Few Zephyrs remain on Australian roads today and the example in the photograph was taken at a small vintage and veteran car display in Hervey Bay Qld in 2005.