Ice racing is hardly likely to catch on here in Australia any time soon but in Europe it certainly does have a following where a Kia Rio driver has just beaten an F1 driver to take out the championship. The win gives Kia Rio it’s third consecutive series win. 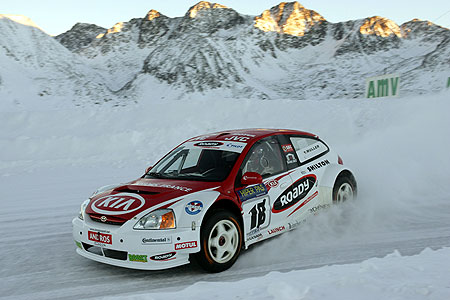 Kia Rio driver, Yvan Muller, has taken sufficient points in the final round of what is regarded as the World Championship for the unique motorsport of ice racing, the Andros Trophy, to beat former F1 Grand Prix World Champion Alain Prost and win the championship title for the third successive year.

The domination of the series, which is held in freezing conditions on specially-built race tracks on the top of mountains in the Alps, by Muller and the Rio was achieved despite Muller carrying more weight-penalty ballast as the twice-previous championship winner. Muller comprehensively fought off last minute challenges from former F1 Grand Prix World Champion Alain Prost in a Toyota, Jean-Phillipe Dayraut in a BMW and Franck Lagorce in a Fiat.

The Kia team wrapped up the title with a superb tactical performance in Super-Besse, high in the Alps, recording solid placings in both races that were sufficient to secure enough points for Muller to win his tenth ice racing title.

According to Muller, “It was the hardest ice racing season in my career, and surely the most beautiful victory, even if I had to play a game I’m not used to. During the last three seasons, the team proved we could beat everybody, dominating in 2004 and 2005, or playing tactics and nerve breaking games this season.â€

“In racing we are used to hearing about ‘fastest times,’ but this year we had our ‘fastest’ time even with 490 kilos of ballast,” commented Paul Bourion, Kmotorsport team principal. “We did three seasons with the Kia Rio and we won three championships, thanks to Yvan, while this year and in 2005 we also won the constructor’s championship. And we are very proud of that record,” he added.

Muller and the Kmotorsport team now go to Paris and the Stade de France for the final event of the season — a non-championship round on a specially created ice-track at the country’s national stadium on 18 March.