Kia has announced the first details of its new global flagship, the 2007 Opirus although it seems that global is a relative term because it’s only being released in a left-hand drive version.

Kia suggest that significant improvements have been made to the ride, handling, safety and refinement, while Opirus now weighs less and delivers higher performance.

On the outside the design certainly shows Kia’s linkage to its parent company Hyundai.

For the 2007 model, Opirus buyers will be offered a choice of three interior colors — two-tone Beige or Gray and one-tone Black, with contrasting accents in wood grain or aluminum. 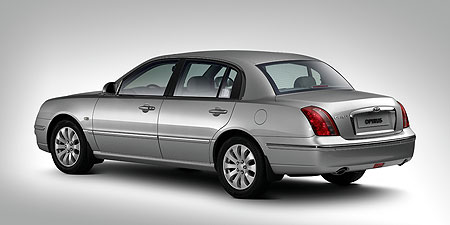 The new car will come in what Kia describes as five new, more sophisticated colors.