Skip to content
4 Comments on Should I be Thrilled …Posted in Hyundai By Stuart LiveseyPosted on December 22, 2006September 17, 2018

… that my 2000 Hyundai Grandeur has developed a fault that no one has heard of before?

For the latest on this story see Hyundai Meltdown.

Our 2000 Hyundai Grandeur has been running a little sluggish lately and She-who-must-be-obeyed and who only knows two speeds (flat out and stop) decreed that it must be fixed – it was spoiling her driving experience. 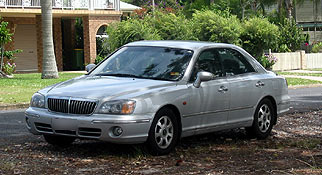 So off I toddled to the mechanic this morning who took it for a test run and found that it seemed to be ‘a little flat’. I thought it might have been the plugs and so did he and after checking the service record it definitely is time for the plugs to be replaced … but wait … there’s more.

Tucked away under the manifold cover towards the back of the motor on the driver’s side is a small electric motor. According to the experts the motor controls the ‘variable throat’ on part of the fuel injection system and in our Grandeur the top of that motor appears to have melted.

The mechanic rang his contact at Hyundai and was told that no one has ever had that problem in a Hyundai Grandeur before … so there’s no cheap alternative but to buy a new one and no one knows what the price of that little electric motor might be.

So while he’s waiting for Hyundai to get back to him with a price our guy is calling a few wreckers to see if there’s a second-hand part available.

I guess I’ll know if I’m thrilled or not when I get the bad news about the cost of the part in the New Year.

Still, things could be worse. While I was picking the Grandeur up the mechanic got a phone call from another regular customer who had just destroyed the gear box in his Nissan Patrol … and he was planning on going away in it over Christmas.

In the town where I live most decent mechanical repair shops were closing at lunchtime today and not re-opening till January 2.

Should I be Thrilled …

4 thoughts on “Should I be Thrilled …”