This is not a replacement for an existing vehicle

Kia Motors Corporation has confirmed that its all-new production model, the Kia Soul, will be marketed globally with a choice of three highly efficient engines (depending on individual markets), when it goes on sale in early 2009.

Both the 1.6-litre, four cylinder, 16-valve DOHC power units are based closely on engines fitted to the hugely successful, European-built, Kia cee’d. 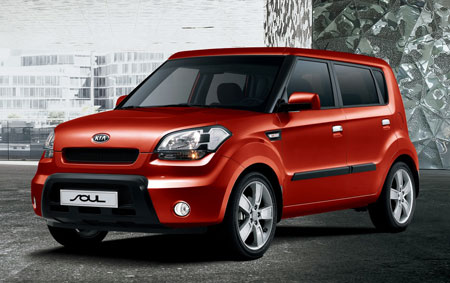 Kia has also confirmed that the new model, which will be available exclusively as a five-door hatchback with front-wheel drive, will have an overall length of 4,105 mm, and a 2,550 mm wheelbase. Height will be 1,610 mm and width 1,785mm excluding door mirrors.

To be manufactured in Korea from November 2008 for overseas markets, the Kia Soul will defy conventions and appeal especially to the young and the young-at-heart whatever their age.

Kia Soul is not a replacement for an existing vehicle and is destined to play a unique role within Kia’s global product line-up. Kia Soul will provide a creative platform for buyers to individualise and match their car to their own personality.

The World Premiere of the Kia Soul will be celebrated on 2 October 2008 at the Paris Motor Show. The exciting new Kia model is scheduled to go on sale in Europe during February 2009, with sales in the USA and remaining overseas markets beginning in April 2009.

Another Small Car From Kia