Skip to content
1 Comment on 1950 HudsonPosted in Vintage and Veteran By Stuart LiveseyPosted on May 12, 2009September 17, 2018Tagged 1950 Hudson, Hudson Motor Car Company

Perhaps we should take a break in the midst of all this doom and gloom and spend a few moments in a different era … an era when cars were big and no one worried about fuel consumption.

So let’s go back to a year before I was born … it’s 1950 and the Hudson Motor Car Company – established in 1909 – was busy building the 1950 Hudson. Although the 1950 Hudson was a big car the body was surprisingly light in weight yet very strong and the car handled well on the roads.

The 1950 Hudson saw the introduction of what was known as a “step-down” body where the floor of the car was actually lower than the bottom of the door. Today every car you can buy has that “step-down” body but back then Hudson was the first and sadly it was that innovation that saw the end of the Hudson Car Company.

While the “step-down” body added to the strength of the car it made restyling very expensive and a small car manufacturer like Hudson could not change it’s designs quickly enough to keep up with the big car makers.

Today there are still a number of 1950 Hudsons around and I managed to come across two on two consecutive Saturdays this month. This was the first one and I caught it just a few blocks from my home in Hervey Bay. 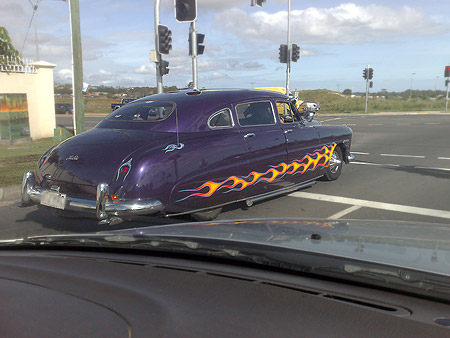 I somehow doubt that the car was delivered from the factory in that paint scheme.

The second 1950 Hudson was parked in the RNA Showgrounds in Brisbane and the owner was attending the same model railway exhibition that I had just come from. 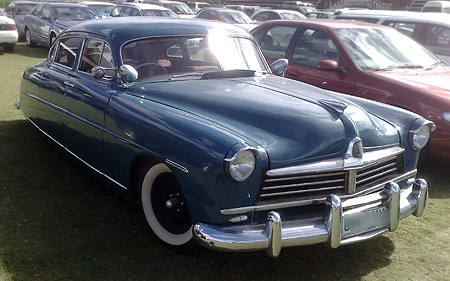 This one is perhaps a little closer to the way it would have looked when it was first delivered. 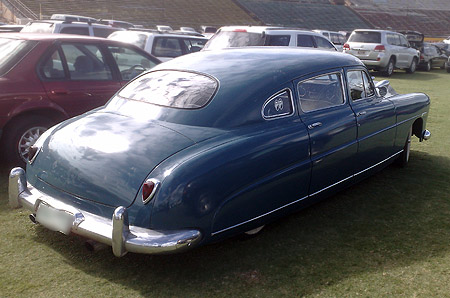 I wouldn’t have seen it parked amongst the other cars unless the parking attendant hadn’t drawn my attention to it. I don’t walk around with a sign on me that says “Car Enthusiast” … he had just noticed me taking a photo of a 1960s Mustang parked a few rows away.