A peek at the new Toyota Landcruiser Prado

With the sale of SUVs up in October Toyota must be doing a happy dance at the thought of the release of their new Landcruiser Prado – in both short and standard wheel-base variants – in just 10 days time. This is timing with a capital ‘T’ and with the features that the new Prado brings to the market there’s sure to be a lot of interest in the vehicle.

While I’m sure that a large majority of Prados will never see a dirt road, let alone anything approaching rough conditions, Toyota has definitely built this vehicle to be taken off-road and frankly I’d love to take this for a run over to Fraser Island … and not just on the beach. 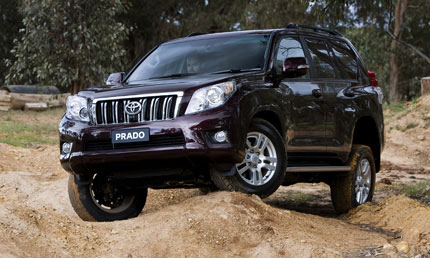 The engine
The new Landcruiser Prado comes with a choice of petrol or diesel engines. The 4.0 litre six-cylinder petrol engine now has dual VVT-i that boost the maximum power output to more than 200KW while the 3.0 litre direct-injection four-cylinder turbo diesel gets some new injectors and improved cooling.

Both engines give a very flat torque curve so you’re going to get maximum power to ground in just about all conditions.

The new Prado comes with either a six-speed manual or, what will undoubtedly be more popular, a five-speed sequential-shift auto box.

Extra features
There will be added instrumentation to ensure that drivers will really know the situation that they’re in and the top of the range Prado will have the option of what Toyota calsl a Pre-Crash Safety System. This system uses short-wavelength radar to track what’s ahead of the vehicle and just how close it’s getting.

If the Pre-Crash Safety System detects that something is getting too close to you at speeds where it may be impossible to stop to avoid whatever it might be then the System can apply the brakes in what Toyota describes as ‘extreme’ situations.

Top of the range variants will include a Crawl control … basically a cruise control for the roughest conditions as well as a four-camera setup that will allow drivers to monitor blind spots on the ground outside of the vehicle.

The body
The Prado body will feature revised styling that Toyota feels will suggest a more aggressive vehicle and what they describe as “rugged elegance”. Beauty is always in the eye of the beholder but I’m sure “rugged elegance” is going to sell a lot of vehicles to people for whom image is always important.

However, I’m sure that there is more to the Toyota Landcruiser Prado than just image and I’m looking forward to the chance to drive both models in some very rough terrain just a week after the official release … sadly it won’t be on Fraser.