… so much so that supply can’t keep up with the demand.
by Stuart Livesey 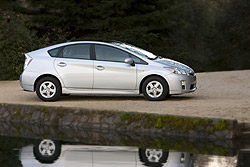 Trying to keep up with the demand for the Prius is nothing new for Toyota. For years they’ve been sold even before they’ve come off the production line and by the end of September there were over 100,000 Prius models on back-order worldwide.

To try and keep up with that demand Toyota are running three Prius assembly lines and by the end of May next year hopes to producing between 500,000 and 600,000 units a year but now, with production reaching 46,000 vehicles a month, Panasonic EV Energy … Toyota’s supplier of battery packs and inverters … can’t keep up with the demand.

Undoubtedly Panasonic will overcome their supply problems but even as they do the demand for the Prius continues to increase. In the United States sales of hybrid vehicles have out-performed the market as a whole and sales of the latest Prius model accounted for 55% of all hybrid sales in October. And just to make the Prius even more appealing is the fact that it was ranked as the US industry’s most reliable family car in an annual survey of consumers that was released last week.

If you’re thinking of making the switch to a Prius then now’s the time to place your order … it might be a while coming but it’s certainly going to be worth the wait.