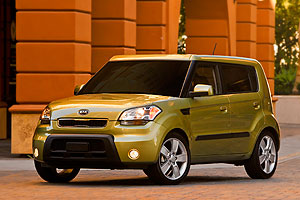 The 2010 Kia Soul has been recognized by the Insurance Institute for Highway Safety (IIHS) in the U.S. and been given a 2010 ‘Top Safety Pick’ award for the second consecutive time this year in the Small Car category.

On the heels of being given a ‘2010 Automotive Excellence Award’ by Popular Mechanics, named to TIME.com’s ‘Most Exciting Cars of 2010’ list and being named one of ‘10 Great and Safe Rides for Teens’ by AutoWeek magazine, the Kia five-door was one of only five small cars to earn the organization’s top honor for earning ‘Good’ ratings – the highest achievable – in frontal, side, rear and rollover impact crash safety tests.

“Since its launch in March, Soul has lived up to its tagline of being Kia Motors’ affordable halo vehicle by winning numerous awards and consistently being a media and consumer favorite,” said Michael Sprague, vice president, marketing of Kia Motors America (KMA).

“Soul being honored with a ‘Top Safety Pick’ for a second time solidifies it as a top contender in its segment as a vehicle that offers consumers the entire package.”

Ratings from the Institute are based on results from frontal, side and rear impact crash tests and, for the first time, a good performance in a roof strength test to measure protection in a rollover also was required to win. Each vehicle’s overall evaluation was based on various measurements specific to each crash angle and overall impact on crash test dummies inside the vehicle at the time of collision.

All vehicles must have electronic stability control available to be eligible.

One thought on “Kia Soul Ranks Well for Safety”