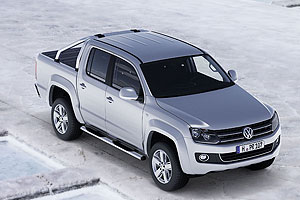 The VW Amarok was designed in Germany, built in Argentina and it will be in the showrooms here in Australia in the second half of 2010 … although it will be on the road in Argentina early in the new year.

While Volkswagen has been building commercial vehicles for many years this is VW’s first foray into the very competitive mid-range ute market where worldwide sales run to about two million every year.

The first Amarok to reach Australia will be a dual cab version and a single cab version will follow in 2011. The VW Amarok certainly looks as though it’s going to be a very sturdy competitor in the mid-range ute market … it’s built on a ladder frame like all the tough utes are. 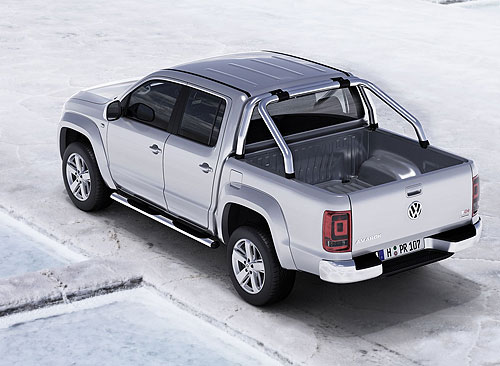 Both engines are paired with a 6-speed manual transmission.

Volkswagen claims that both diesels will give outstanding fuel economy and gives the figures of 7.6 litres per 100 kilometres (equivalent to 199 g/km CO2) the smaller of the two engines and 7.8 litres (206 g/km CO2) for the larger engine.

Volkswagen also says that this is the first time an all-wheel drive vehicle has been offered in this class whose CO2 emissions are less
than 200 grams.

The Amarok will come fitted with an 80-litre tank that will give it a range of over 1,000km. To assist the driver achieve the best fuel economy possible all Amarok utes are equipped with an upshift indicator.

The full-time all-wheel drive version is a rarity in its class. The Torsen differential distributes drive forces at a 40:60 ratio to the front and rear axles, and this gives both excellent vehicle dynamics and high traction.

In addition, selective braking interventions in tough terrain ensure that the wheel with the best traction always gets the most engine power. This drive concept is paired with a chassis that was specially tuned for comfort.

An optional rear differential lock is available for all drive types.

Work or play
Three equipment levels are available on the Amarok. The base version relies on purely mechanical and extremely robust components with manual operation of the windows, door locks and mirror adjustment.

The front bumper, door handles and mirrors are not painted, making them ideal for heavy duty use. The base version rides on standard 16-inch steel rims.

Amarok Trendline is the model that will probably have the most appeal. On this version, the front bumper, door handles and mirror housings are painted in the same colour as the body.

The top of the range Amarok Highline is equipped for enhanced comfort. Building on the Trendline equipment line, the Highline is upgraded by features such as part-chrome mirror housings, various chrome accents outside and inside the vehicle and mudguard skirt extensions in body colour that create space for 17-inch aluminium wheels.

Besides this wide range of features, an extensive accessories programme is also offered for the Amarok from a styling bar to
running boards, cargo cover and Multi-Connect load securing system (standard on the Amarok Trendline and Highline) and a selection of alloy wheels.

Cargo and crew space
Volkswagen claims that the Amarok offers a large and ergonomically designed interior that is the largest in its class. Easy entry, generous space and lots of headroom characterize the “workspace” behind the steering wheel. 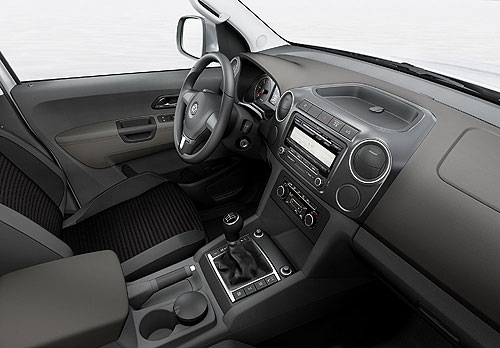 The cabin design also offers ample legroom for passengers on the rear bench seat. When just two persons are aboard, interior storage space can be increased by folding the tall rear seat.

For the first time on a mid-size ute, it is possible to load Euro pallets sideways, saving on space. Thanks to its large dimensions and a payload capacity of up to 1.15 tonnes, sports equipment like quads and bulky machinery can also be transported.

Four tie-down eyes in the corners of the truck bed protect cargo during the drive.

In addition, the (optional) towbar can handle up to 2.8 tonnes trailer load.

Safety
The Amarok comes with four airbags, ESP, ASR, ABS and assistance systems. The belts on the front seats are equipped with belt tensioners and are coupled to a visual and acoustic belt warning system.

Side curtain airbags for head protection are also available for the driver and front passenger. ABS and ASR are standard features on the Amarok as is the electronic differential lock (EDL).

Another standard feature activated by pushbutton is Off-Road ABS, which significantly shortens braking distances on off-road trails and gravel roads.

For the first time in this vehicle class, when driving under 30 km/h the driver can individually set the driving speed for the given descent conditions by braking and accelerating.

All vehicles are also equipped with ESP plus Hill Hold Assist, which holds the vehicle in place while driving uphill until the driver presses the accelerator pedal enough to prevent rolling back.

Key markets for the Amarok are South America, South Africa and Australia; in these markets utes are some of the most sought after recreational and commercial vehicles, because of their versatility. Thanks to its efficient drive technology and tremendous versatility, the Amarok is also expected to be a trendsetter in the contemporary ute class in Europe.