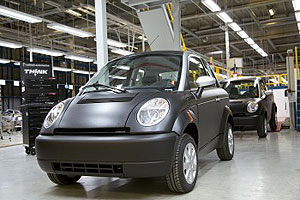 Valmet Automotive is a leading provider of engineering and manufacturing services to the automotive industry and recently became a THINK shareholder and strategic industrial partner. Today marks the start of production at Valmet Automotive’s high-tech manufacturing base, which also produces Garia and Fisker alternative-fuel vehicles as well as Porsche AG’s Boxster and Cayman.

The start of production at Valmet Automotive also marks a new start for THINK, which has made significant progress since announcing its re-capitalisation earlier this year with major new investors coming on board. In recent months THINK has made a series of senior executive appointments from the automotive and clean-tech industries, won major new contracts in the drivetrain supply business, started the roll-out of sales into key European markets and now, re-started production in Europe.

Richard Canny, THINK CEO, says: “This is a very significant day for THINK. We are back in production and I am so pleased that some of our very loyal customers can look forward to delivery of their long-awaited THINK City before Christmas. The order bank stands at around 2,300 vehicles, and our first priority is to deliver to these customers now that our vehicles are rolling off the production line again. Our next priority is to build on this order book with continued expansion in Europe and around the world.” 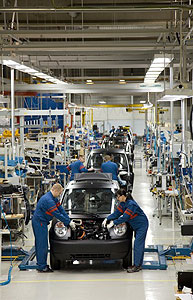 He added: “Our strategic alliance with Valmet Automotive is much more than just about assembly – we are already reaping the benefits of Valmet’s expertise in manufacturing and engineering – with time being taken out of the production process, more manufacturing done on site and an overall more efficient industrial solution, from product development support right through to final assembly.”

The THINK City is the world’s first EV to be granted certification with the European CE conformity mark and EU homologation requirements (M1 certificate). To achieve these exacting standards, the THINK City has been through extensive testing and validation and several hundred computer simulations and correlations.

Ilpo Korhonen, President of Valmet Automotive, said: “Valmet already has expertise in the EV industry, but with the start of industrial production of the THINK City at our cutting-edge facilities in Finland, we aim to become a leader in the industry. The start of production is a very important step for both THINK and Valmet, and we aim to grow our strategic alliance alongside the growth of the THINK brand around Europe as more deliveries of the eagerly awaited THINK City are made in the coming weeks.”

Sales of the THINK City have started in selected key EV markets such as Austria, Denmark, The Netherlands, Norway, Spain, Sweden and Switzerland, with first fleet deliveries due to start before Christmas. The majority of THINK sales in these countries have been made to municipal authorities and utility partners, supported by government incentives

Think City Back in Production