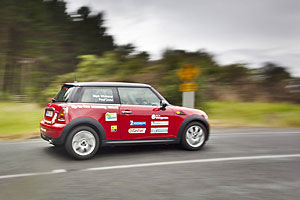 It’s certainly and impressive fuel consumption record but it might have been more meaningful if the car had been driven using normal driving techniques.

A diesel-powered MINI has set a New Zealand fuel economy record, driving from the tip to the toe of the country using less than two tanks of fuel.

Using fuel at an average rate of 3.5 litres per 100 kilometres, the MINI Cooper D can now claim the title as the most fuel efficient vehicle in New Zealand.

Professional ecodriving consultant, Mark Whittaker, and award-winning motoring journalist Paul Owen, set out from Cape Reinga on 7 December, and travelled more than 2000 kilometres to Bluff, arriving at midday, Friday 11 December. Over the journey, the MINI used 72.1 litres of diesel at a cost of just $77.82.

“We are thrilled! Not only did we archive our goal, but we even have enough fuel left to get us back to Dunedin,” said Paul Owen.

Through the use of ‘ecodriving’ techniques, the drivers managed a 20% improvement on the car’s factory-quoted fuel economy figures in the unmodified, standard specification MINI.

Mark Whittaker said the aim of the exercise was to highlight the potential for cutting New Zealand’s transport related emissions at little or no extra cost.

“In setting this record we are demonstrating that everyone can contribute to reducing emissions by choosing a fuel efficient car and employing simple ecodriving techniques,” said Mr Whittaker.

MINI is a sub-brand of the BMW Group, recognized in the Dow Jones Sustainability Index as being the world’s most sustainable carmaker.

“The MINI has proven that new, small clean diesel engines have an important part to play in improving the fuel economy of the New Zealand vehicle fleet,” said Mr Gilbert.

“And the other clear message from this exercise is that it is not only what you drive, but how you drive, that counts,” he said.