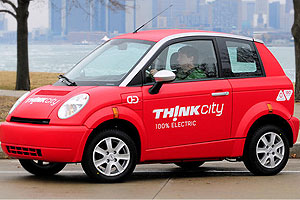 THINK, the Scandinavian electric vehicle (EV) maker, today announces plans to start production in Elkhart County, Indiana and the launch of the THINK City into the North American market.

The pioneering global manufacturer of electric vehicles plans to begin selling the THINK City, one of the world’s first highway-capable urban EVs, in the U.S. later this year. The company plans to invest $43.5 million in building improvements and equipment in Elkhart County, and the plant could begin assembling vehicles in early 2011.

THINK’s investments in Elkhart County will support manufacturing capacity for more than 20,000 vehicles a year. The company started delivering the latest generation of its THINK City model to customers in Europe last month.

The THINK City is a purpose-built, all-electric car designed for urban environments. It can travel at highway speeds for more than 100 miles on a single charge with zero local emissions. It is the world’s first EV to be granted certification with the European CE conformity mark and EU homologation requirements (M1 certificate). To achieve these exacting standards, the THINK City has been through extensive testing and validation and several hundred computer simulations and correlations.

European production of the THINK City is already underway in Finland with manufacturing partner Valmet Automotive, which also assembles the Porsche Boxster and Cayman models for Porsche AG. Production will continue at Valmet Automotive to support European market demand, where sales have begun in selected key EV markets such as Austria, Denmark, The Netherlands, Norway, Spain and Sweden.

THINK CEO Richard Canny, said: “We are extremely pleased to announce plans for a second THINK production location today. Things are moving very swiftly for the company in Europe following the start of production in Finland and the subsequent start of sales at the end of last year. Now its time for us to do the same in the North American market – and there’s no better place to start than Indiana.”

He continued: “Indiana is quickly becoming an international leader in advanced, clean technology manufacturing. It’s an industry with a future, and EV’s are right in the center of the convergence of where the auto and energy sectors are heading. We’re proud to be part of this effort to reinvent and reinvest in U.S. auto manufacturing.”

THINK is joining Indianapolis-based lithium-ion battery maker, EnerDel in choosing Indiana for a North American manufacturing location. Ener1, the parent company of Enerdel, is a 31% equity stakeholder in THINK. In addition to incentives provided by the State of Indiana and Elkhart County, THINK plans to utilize funding from the U.S. Department of Energy ATVM loan program to establish its new production facility.

Think to Open a US Production Line