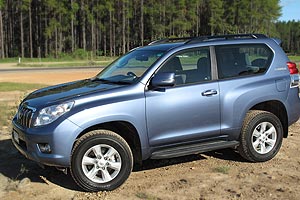 OK so I’ve not driven a big four-wheel drive before but I wasn’t about to let that stop me from taking up Toyota’s offer of playing with a new three-door Toyota Prado for a whole week.

First impressions? ‘Wow this is big and Stuart wants me to drive this lumbering monster back through all that Brisbane traffic?’

Yes, that was my first impression when I clambered into the Toyota Prado 3-door SX that Toyota had just given us for a week’s evaluation. It certainly did seem big compared to our usual set of wheels … a 2000 model Honda CR-V

Sure it might have been the short-wheelbase version but it still looked big to me. I’m not short but when I stood next to it the roof seemed to be well-above my head.

However, I didn’t need to stress because once I had it moving I found that the steering was light, the throttle was responsive, the automatic gearbox was smooth and you sit way up high and have a good all-round view from the driver’s seat. 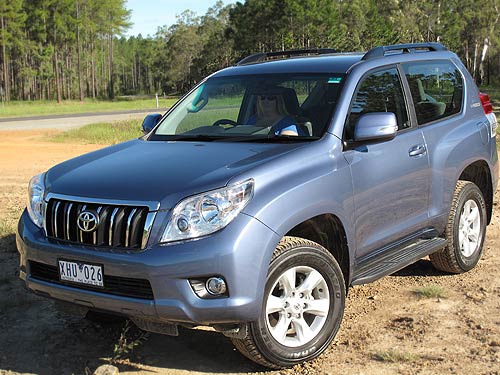 There’s not a great view from the rear-view mirror but the side mirrors more than make up for it and you can really see the vehicles that are coming up from behind.

So I got us through the Brisbane traffic and enjoyed the experience … and if you were following us and saw the hazard lights come on for a few moments … well that was Stuart playing with the buttons like some big kid.

We picked the 3-door Prado up from Toyota’s old plant in Acacia Ridge and drove it back to Hervey Bay yesterday afternoon. On the trip home we travelled along the Bruce Highway as far as Gympie and then took a fairly rough back-road from Gympie to Maryborough and the Prado was great to drive on both surfaces.

It’s very quiet inside with hardly any road noise … in fact it’s so quiet that you almost forget you’re driving a diesel and the engine noise can be a bit of a surprise if you get out of the vehicle while the motor’s running.

The suspension is certainly firm but then this really is designed to be able to cope with off-road conditions so there’s a trade-off between comfort and a suspension that will get you over some rough country.

Stuart wondered whether the short-wheelbase would tend to affect the ride … he described it as ‘chop’ but there was none of that … even on the really rough sections of back-road we travelled over.

There was no body-roll either. Stuart’s a bit more aggressive on the open road than I am and he was pushing the Prado through some of the curves on that back road quite quickly but there was no hint of roll at all.

Things that bugged me
That was yesterday and now we’ve run it around town … done some shopping … visited a few clients of my web design business … and just generally treated it as we would our own vehicle I have to say that, while it’s nice to drive, the 3-door Prado has some less than stellar points and really doesn’t suit our lifestyle. 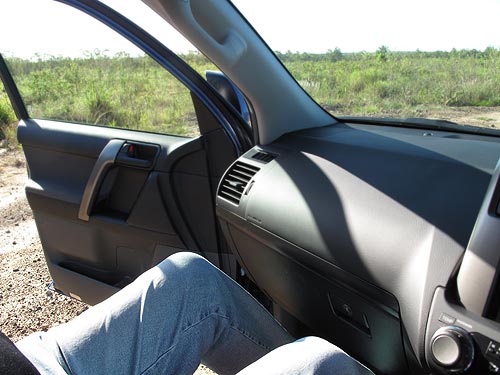 The passenger’s seat doesn’t slide back as far as the driver’s seat does and that puts the knees of tall people very close to the dashboard. Those sexy knees in the photo belong to Stuart who is about 184cm tall … in an accident his knees could easily hit the dash and he can’t stretch his legs out as he can in other vehicles.

Two doors can be a pain
I don’t know about you but when we head off somewhere we often jump in the car and just toss things like my handbag, our cameras, laptops, folders onto the floor behind the front seats.

In a vehicle with front and rear doors it’s easy to recover them when you get to where you’re going but in a vehicle with only one set of doors getting your handbag out of the back can involve spending time folding the front seat down so you can reach in and grab what you want.

We’ve had the three-door Toyota Prado for just two days and I’ve already had to fold the front passenger seat down several times just so I could find my handbag.

Those back seats
If there’s no elegant way for me to get into the Prado’s front seats then there’s no way I’m even going to try and get into the rear seats. Stuart did today while we were taking a friend for a drive and it was just not a pretty site.

The back door
It’s big … if you’re parked on a slight upward slope it’s heavy to close and in a shopping centre car park it takes up a lot of room when you open it. 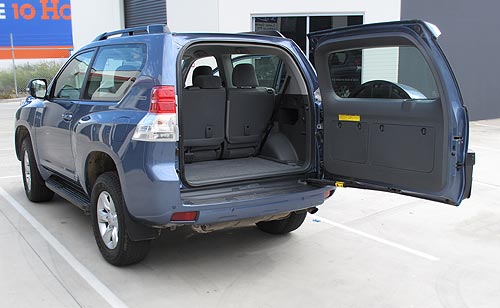 And speaking of shopping centre car parks
I let Stuart drive when we went to do the hunting and gathering thing this morning and I’m glad I did. While you have a great all-round view from the front seats you don’t see much of the ground that’s close to the vehicle.

While some of the more optioned variants might come with a great camera system that may make parking easy the SX doesn’t and trying to fit between the lines and leave room to get out of the vehicle can be a challenge. Obviously the more you drive it the more proficient you may become at parking in car parks but expect to have some problems in the beginning.

So am I going to let Stuart do all the driving for the rest of the week? Absolutely not!

What did I like about the 3-door Prado?
After grumbling about all the things I don’t like you may think that there isn’t much I do like about it but that’s not true. I’ve already mentioned some features that really impressed me and now here are a few more.

The air conditioning is outstanding and even the base model comes with a dual zone control setup that really does work.

All the controls are well set out and those that might be a little hard to reach are repeated on the steering wheel. Even the SX comes with a hands-free system for mobile phones as standard and, for me, that’s outstanding.

The reversing camera and rear parking sensors are a great standard fitting too.

And I still can’t get over just how light the steering is. This is a big vehicle but it certainly doesn’t feel that way when you’re on the road so city or country driving is easy despite the size so don’t let that put you off.

The front seats are comfortable and supportive too. Both Stuart and I have back injuries and after the four-hour trip home from Brisbane we got out of the vehicle without a twinge so if you’ve got a back problem then the Prado could be the vehicle for you.

We’ve still got the three-door Toyota Prado SX for another five days so I’ll be back with more later in the week.