Skip to content
2 Comments on General Motors to Build an Electric Motor PlantPosted in General Motors, News By news deskPosted on January 27, 2010September 15, 2018 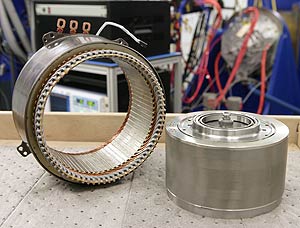 Engine are just one part of the car manufacturing process that major car makers want to have complete control of and these days most major manufacturers own the engine plants that they rely on. However, up until now, no major car maker has taken the next step and announced a mass-production facility for electric drives.

That all changed yesterday when General Motors became the first car maker to take that next step.

By bringing this capability to the U.S., GM will create approximately 200 jobs. Local and state incentives, along with the Recovery Act funding announced in August 2009 by the U.S. Department of Energy, are helping to make this facility expansion and job creation possible.

“Electric motors are the engines of the future,” Stephens said. “By designing and manufacturing electric motors in-house at Baltimore Transmission, we can more efficiently control the design, materials and production processes. It will also enable us to lower costs and improve performance, quality, reliability, and manufacturability of the electric motors we use in our vehicles.”

Stephens also noted the importance of the new technology to the nation’s and Maryland’s overall economic growth.

“Electric motors are driving the next wave of automotive growth,” Stephens said. “The expansion of the Baltimore plant will generate a significant influx of money and jobs into the greater Baltimore area, creating U.S.-based manufacturing jobs.”

Through job retention and creation, Baltimore Transmission, which opened in 2000, will employ close to 400 people.

Nationally, including immediate project jobs, manufacturing jobs and the impact on suppliers and local communities, the investment is estimated to retain or create about 1700 jobs.

“Ultimately this expansion, its direct economic impact, its contribution to GM’s capabilities, and its impact on the vehicles we drive will be a model of what a lean, energetic, creative General Motors is capable of doing and contributing, “ Stephens said.

2 thoughts on “General Motors to Build an Electric Motor Plant”