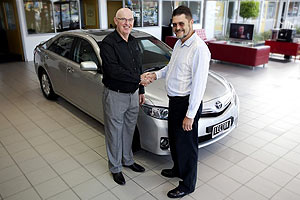 With all the bad press that Toyota has been getting recently you might be excused for thinking that Toyota might have trouble getting the buying public interested in their new hybrid Camry.

But that’s not the way it is … in fact Toyota have had no trouble in selling their first hybrid Camry and the buyer already owns a hybrid Prius.

Australia’s first Toyota Hybrid Camry has been bought by the owner of a hybrid Prius with 240,000km on the clock.

The family will keep the Prius as their second car.

Colin and Eunice Elvey moved to Australia from New Zealand in late 2008 and brought their much-loved Prius with them.

“It’s the best car I’ve ever owned – I couldn’t leave it behind,” Colin said.

“I race go-karts and I drive the Prius like a go-kart.”

Colin and Eunice bought their first-generation Prius in New Zealand.

In Australia, Eunice has enjoyed the car so much she has relegated Colin to a conventional small car for his daily commute.

“I was just about to buy a latest-model Prius when I heard about Hybrid Camry,” Colin said.

“I’ve always had a policy of buying locally. In New Zealand I always bought locally, and because later this year I qualify for Australian citizenship, I’ve now decided to buy Australian.

“I got on the waiting list last July to make sure I got one of the first cars.”

Colin and Eunice clocked up their near-quarter million kilometres in Prius by extensively touring New Zealand.

Their first Australian trip is planned for Easter when they and their nine-year-old granddaughter Tiana take the Hybrid Camry from their home in Werribbe, Victoria, to the Byron Bay Blues Festival.

“I drive the old Prius really hard and still get 5.3litres/100km,” he said. “I’m looking forward to seeing what we get from the Hybrid Camry.”

Colin, a health and safety consultant to the oil and gas industry, is already planning a round-Australia tour.

“The Camry will be the first new car we’ve ever bought and we intend keeping it a long time,” he said. “Round Australia has to be the ultimate goal.”

The Toyota Hybrid Camry went on sale on February 15, the day Colin and Eunice took delivery.

The Hybrid Camry produces a combined 140kW from its 2.4-litre petrol engine and electric motor.

It uses just 6.0litres/100kms* of regular petrol, making it almost 32 percent more frugal than the automatic petrol Camry which was the most fuel-efficient Australian built car.