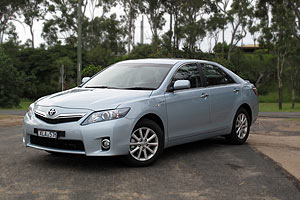 What I liked about it: Power – it’s got plenty of it and Toyota is happy to tell you that the Hybrid Camry is the most powerful Camry on the market.

Economy – On short trips down to the shops it’s not quite as impressive as you might hope for but in peak-hour traffic or on a long run in the country the Hybrid Camry is really going to impress you with just how little fuel it actually uses.

It’s quiet – you just won’t believe how quiet this car is. On the highway, unless you’re tackling a steep hill, the only noise you will hear is the sound of the tyres on the road.

Handling – the suspension has been specially tuned for Australian conditions and it handles the curves and corners very well.

What I didn’t like about it: Starting – It takes a while for the Hybrid Camry to actually start. You jump in and go through the start procedure and then you wait while the Hybrid Synergy Drive reaches the point where it’s ready to start. If you’re in a hurry to get your pregnant wife to the hospital at 3am on a cold winter’s morning the start time will seem like an eternity.

***UPDATE We have since been advised by a reader that the Hybrid Camry is ready to move on battery power as soon as the “Ready” light comes on.

The Cruise Control control – it’s tucked away under the steering wheel yet it’s part of the steering wheel. If you want to use it you have to take your eyes off the road and that’s dangerous. I really did not like it!

Our first impressions
Her thoughts on the Hybrid Camry

The full Hybrid Camry road test.
It’s unlikely that Toyota would have built the Hybrid Camry in Australia without the financial support that it received from the Australian Government. Fortunately for us that support was forthcoming and we now have a Hybrid Camry that is distinctly Australian. 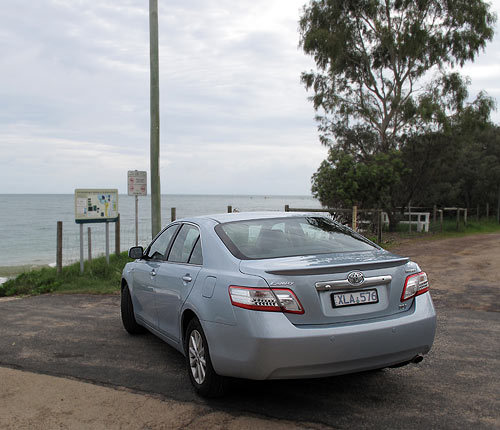 Whether or not that Australian flavour will appeal to the public is yet to be seen although sales in this town have certainly been better than what the local dealer was expecting. The stumbling point for many who will think about buying the Hybrid Camry is the fact that it’s more expensive that the normal Camry and some people may not see any real value in choosing the hybrid over the conventional model.

Of course Toyota is quick to tell you that the saving in fuel costs that the Hybrid Camry can give you is significant … and it is. It’s also obvious that there are more features in the Hybrid Camry that you don’t get in the standard Camrys but do those extra features and the savings in fuel balance out the higher cost of the car?

I sure hope it does because this car is a lot of fun to drive!

Under the bonnet
The Hybrid Camry is powered by an Australian built 2.4-litre petrol and an electric motor that gets its power from the battery pack that resides under the rear parcel shelf in the boot. Together they give the Hybrid Camry 140kW of power and you really feel that power when you put your foot down.

Engine noise is kept to a minimum and about the only time I really noticed the sound of the petrol engine was when I was accelerating hard up a steep hill. If you’re one of those drivers who likes to listen to the engine note you will certainly miss that but that’s a small price to pay for the acceleration and fuel economy you get from the Hybrid Camry.

Fuel Economy
AussieMotoring’s offices are located three to four hours drive north of Brisbane so when we pick a test car up we’ve already given it a pretty fair run by the time we get back to the office. We do that trip so often … both on business and privately … that we have a very good idea of how good the fuel consumption figures are going to be when we’re only an hour into the trip.

Right from the start we knew that the fuel consumption figures for the Hybrid Camry were going to be outstanding.

Toyota says that those people who buy a Hybrid Camry can expect to get a combined fuel consumption figure of 6.0L/100km and while we didn’t quite get it down to that low figure we certainly were under 7.0L/100km and I expect the figures would have been better if the car had done a few more kilometres than the 980 that were on the clock when we picked it up.

The Hybrid Camry Toyota comes equipped it with several different displays to help you alter your driving style so that you can achieve those great fuel consumption figures. But don’t look at any of them within the first kilometre or so of any journey. I’ve got a photo of one of those displays showing that we were running at 99.9L/100km and those are figures you don’t want to see.

In Toyota’s defence I should say that in the first few kilometers the petrol engine is not only powering the car but also charging the battery.

And don’t be alarmed if the motor seems to stop when you pull up at a set of lights because that’s exactly what it does … it stops. But it starts again the moment you put your foot on the accelerator when the lights turn green. It gives a reassuring little rumble and you’re away. 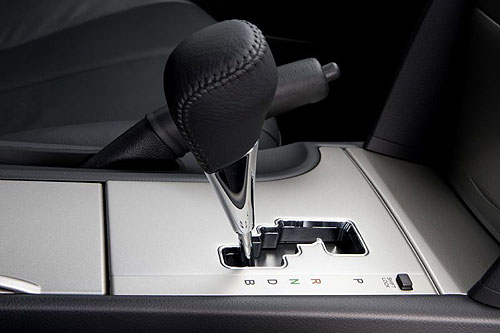 Transmission
Using an electric motor to help provide power for the car and tricky things like turning the petrol motor off when you’re stopped at lights is only part of the equation that Toyota used to produce the great fuel economy that you’ll get in the Hybrid Camry.

Instead of a conventional gearbox the Hybrid Camry has two linked sets of planetary gears that are computer-controlled so there are none of the usual subtle (or not so subtle) gear changes that you would normally expect to feel in an automatic transmission.

Once again, if you like to know what gear your car is in by listening to the gear changes and the engine note you’re going to get a little confused because it’s always in the right gear no matter what you’re doing. It can take a little getting used to but after a while you just sit back and go with the flow.

Ride and Handling
Did I say that I loved the ride and handling? You bet I did … even over rough goat tracks that masquerade as highways in this part of Australia. On secondary roads that are much better than the highway the car sat flat with very little body roll as I pushed it through curves that would make lesser cars roll and squeal their tyres.

Driving Position and Controls
The driving position was good and the driver had a very clear view of the road ahead. The displays on the dashboard were clear and easy to read and some of them could be turned off if they were too distracting.

The Hybrid Camry has an Optitron vacuum fluorescent instrument cluster that ensures maximum visibility regardless of the ambient light. You might wonder if that isn’t just a little bit of over-kill but it was one of the first things I missed when I got back into my vehicle after returning the Camry.

The Hybrid Camry comes equipped with a reversing camera and rear parking sensors … even in the base model … and they are quite useful because the view to the rear is a bit limited.

Bluetooth and basic stereo controls are mounted on the steering wheel and that’s definitely a plus because flying the stereo system from the dashboard can be a bit involved.

Comfort and Safety
Wet weather and long road trips tend to play havoc with a back injury I’ve had for nearly 15 years and we just happened to have the Hybrid Camry during a very wet period in this part of Queensland and we did four long trips while we had it. I got out of the Hybrid Camry at the end of the test period with hardly a twinge. 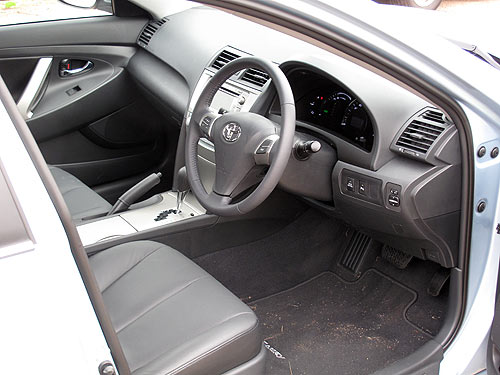 The front seats have great lumber support and you can adjust them in a variety of ways to suit your particular needs. There’s also plenty of legroom in both the front and the back and even someone as tall as me could ride comfortably in the back seats. 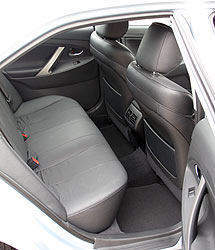 The air conditioning is a dual zone system for front seat passengers and it worked well even on some stinking hot days that were so bad we really didn’t want to get out of the car and face the heat. The air conditioning worked so well that we never took it out of economy mode.

The Hybrid Camry comes with all the usual safety features such as ABS, traction control (not once did I manage to set off the traction control alarm) electronically controlled braking and six airbags and it really does feel like a safe car to drive.

Of course the Hybrid Camry comes with Smart Entry and Smart Start and that may sound like something almost trivial but once you have driven a vehicle with those features you’ll miss them when you get into a car that doesn’t have them.

The Luxury model Hybrid Camry also comes with rain-sensing wipers and once you’ve driven a car with that feature fitted you’ll find it rather tedious going back to the old system where you actually have to turn the wipers on yourself.

Luggage space
This is one area where the Hybrid Camry is lacking when compared to the standard Camry models. You see, they had to put the electric battery somewhere so they put it in the boot and it does take up some space. It also means that the ‘60’ part of the 60/40 split rear seat is pretty useless because you can fold it down but the battery prevents you from slipping anything that’s long from the boot through into the backseat area. 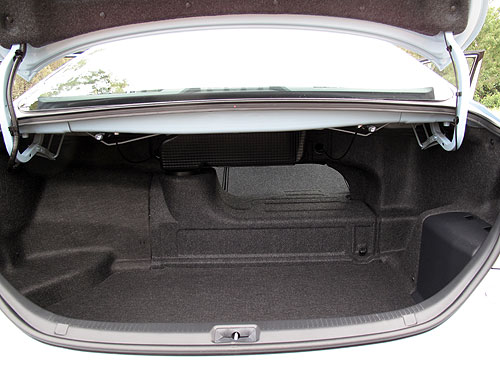 While the car is ideal for a family around town it might be a bit lacking in luggage space if you wanted to take the family away on a holiday.

Two models to choose from
There are two versions of the Toyota Hybrid Camry but there is no badging that distinguishes the Luxury Hybrid Camry from the base-model Hybrid Camry and that can cause some confusion.

Just ask our other reviewer who was sure she was driving the base-model Hybrid Camry when we were actually testing the Luxury version. It could have had something to do with the fact that she thought that the Luxury version came with a sat/nav system as standard and when the test vehicle didn’t she presumed we had the base model.

The satellite navigation system is actually an option on the both the standard and the Luxury models.

As I said earlier, those prices may be a bit of a stumbling block for many buyers but the Hybrid Camry is certainly going to save you plenty when you pull up at the bowser and both the base-model and the Luxury version carry more extras than their equivalent petrol Camry models.

And then there’s the service and warranty. Obviously many potential buyers are going to see the Hybrid Camry as a vehicle that will cost far more when it comes to scheduled servicing but Toyota have said that:

Toyota are also giving a warranty on the HV (Hybrid) Battery that is at the heart of the electrical propulsion system in the Hybrid Camry of 8 years or 160,000km.

Conclusion
So is the Hybrid Camry worth buying? I would certainly consider buying one and once you’ve test-driven one you’ll probably be hooked too.