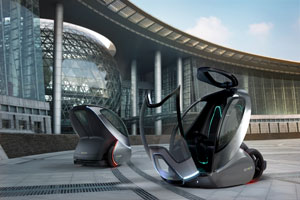 Well there’s no doubt that in 20 years time parts of this planet are going to be a very crowded places and getting around in some of the big cities is going to be quite a challenge. General Motors and Shanghai Automotive Industry Corp. Group (SAIC) believe this vehicle … the EN-V is going to be the future of personal transport in the future.

Personally this is not a car for me … it’s enclosed, it’s cramped and if you suffer from claustrophobia you’re probably breaking out in a cold sweat just looking at it. It’s also the vehicle that GM thinks will replace the motor car. 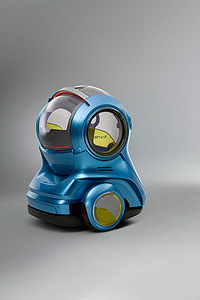 Three EN-V models were unveiled in Shanghai this week. They represent three different characteristics that emphasize the enjoyable nature of future transportation: Jiao (Pride), Miao (Magic) and Xiao (Laugh). The concepts will be showcased from May 1 through October 31 at the SAIC-GM Pavilion at World Expo 2010 Shanghai. Shanghai is expected to become one of the epicenters for the establishment of personal mobility solutions for the future.

“EN-V reinvents the automobile by creating a new vehicle DNA through the convergence of electrification and connectivity. It provides an ideal solution for urban mobility that enables future driving to be free from petroleum and emissions, free from congestion and accidents, and more fun and fashionable than ever before,” said Kevin Wale, President and Managing Director of the GM China Group.

Breakthrough Technology
EN-V’s platform has evolved from the platform of the Personal Urban Mobility and Accessibility (P.U.M.A.) prototype that was developed by Segway and debuted in April 2009. Segway has worked collaboratively with GM to develop and deliver multiple copies of the drivetrain platform that seamlessly connect to and power the various EN-Vs.

EN-V is propelled by electric motors in each of its two driving-mode wheels. Dynamic stabilization technology empowers EN-V, giving it the unique ability to carry two passengers and light cargo in a footprint that’s about a third of a traditional vehicle. It can literally “turn on a dime” within its own operating envelope. In addition, everything in EN-V is drive-by-wire, supporting its ability to operate autonomously or under manual control. The motors not only provide power for acceleration, but also bring the vehicle to a stop. 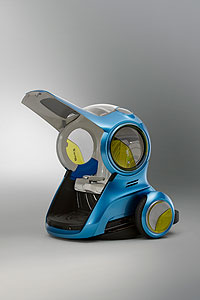 Power for the motors is provided by lithium-ion batteries that produce zero emissions. Recharging can occur from a conventional wall outlet using standard household power, allowing EN-V to travel at least 40 kilometers on a single charge. EN-V can also improve the efficiency of the public electric infrastructure since the vehicle can communicate with the electric grid to determine the best time to recharge based on overall usage.

By combining the Global Positioning System (GPS) with vehicle-to-vehicle communications and distance-sensing technologies, the EN-V concept can be driven both manually and autonomously.

Its autonomous operating capability offers the promise of reducing traffic congestion by allowing EN-V to automatically select the fastest route based on real-time traffic information. The concept also leverages wireless communications to enable a “social network” that can be used by drivers and occupants to communicate with friends or business associates while on the go.

This combination of sensing technology, wireless communication and GPS-based navigation establishes a technology foundation, pieces of which could migrate from the EN-V concept and potentially lead the way to future advanced vehicle safety systems.

The ability to communicate with other vehicles and with the infrastructure could dramatically reduce the number of vehicle accidents. Using vehicle-based sensor and camera systems, EN-V can “sense” what’s around it, allowing the vehicle to react quickly to obstacles or changes in driving conditions. For example, if a pedestrian steps out in front of the vehicle, EN-V will decelerate to a slower and safer speed and stop sooner than today’s vehicles.

GM has been a leader in developing autonomous vehicle technology, having worked alongside students and faculty at Carnegie Mellon University in the U.S. city of Pittsburgh, Pennsylvania. This collaboration created “The Boss” Chevrolet Tahoe, which brought autonomous vehicle operation to life in 2007. EN-V takes the lessons learned in “The Boss” and offers mobility to people who could not otherwise operate a vehicle.

“The EN-V concept represents a major breakthrough in the research that GM has been doing to bring vehicle autonomy to life,” said Alan Taub, Global Vice President of GM Research and Development. “The building blocks that enable the autonomous capabilities found on the EN-V concept such as lane departure warning, blind zone detection and adaptive cruise control are being used in some GM vehicles on the road today.” 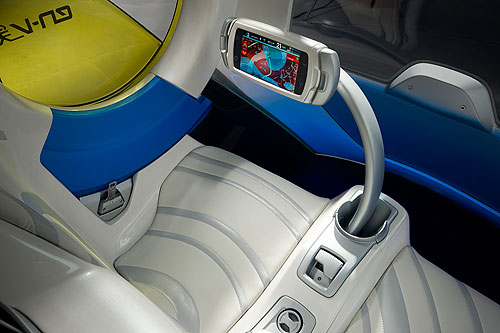 EN-V has been designed for the speed and range of today’s urban drivers. It weighs less than 500 kilograms and is about 1.5 meters in length. By comparison, today’s typical automobile weighs more than 1,500 kilograms and is three times as long. In addition, today’s automobiles require more than 10 square meters of parking space and are parked more than 90 percent of the time. EN-V’s smaller size and greater maneuverability mean the same parking lot can accommodate five times as many EN-Vs as typical automobiles.

Smaller, Smarter Design
While EN-V leads the way in terms of efficiency and technology, it also sets a new benchmark for vehicle design. For its debut, GM had design teams around the world provide their vision of what future mobility will look like. Xiao (Laugh) was designed by GM Holden’s design team in Australia, while the look of Jiao (Pride) was penned by designers at GM Europe and Miao (Magic) was designed at the General Motors Advanced Design Studio in the U.S. state of California.

Each EN-V has a unique design theme to showcase the flexibility of the propulsion platform. The design gives each EN-V its own personality, with a unique opening, elegant interior and innovative color, lighting and seat technology. Xiao offers a more lighthearted appeal, with its “gumball blue” paint and nautical-inspired design. Miao takes most of its design cues from the consumer electronics industry, as evidenced by its sleek, masculine looks. Designers also used Miao to display innovative lighting solutions, including extensive use of LED accent lighting. With its clean lines and bright paintwork, Jiao takes its design influence from bullet trains and Chinese opera masks. 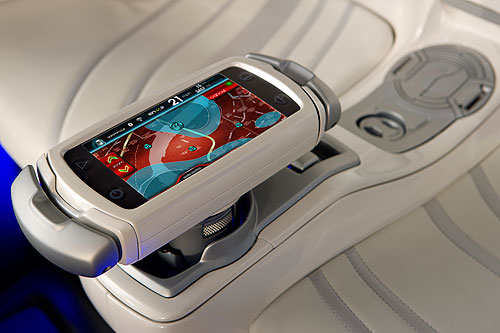 “EN-V incorporates significant technology and material innovation, which has given the design team a whole new world to explore,” said Clay Dean, Director of Advanced Design for GM North America. “Because of the lightweight structures, materials and integrated controls, we created unique surface forms not traditionally found in automotive applications.”

The body and canopy of EN-V are constructed from carbon fiber, custom-tinted Lexan and acrylic, materials that are more commonly used in race cars, military airplanes and spacecraft because of their strength and lightweight characteristics. The ability to work with such innovative materials provided a learning opportunity for GM’s design teams to study the feasibility of future traditional automotive applications.

EN-V’s compact size makes it ideal for use in densely populated cities thanks to its use of advanced safety and propulsion technologies. But good things come in small packages, as witnessed by EN-V’s innovative interior design, which provides maximum visibility to the world outside. A simple interface for activating Wi-Fi-based technologies keeps occupants connected to the outside world.

“The future of how we move around in urban areas like Shanghai can combine the best of personal mobility and public transit. There is a better solution and it is called EN-V. It demonstrates that we have both the knowledge and the ability right now to create a way to move people that not only ensures a ‘better city’ but also offers people a ‘better life,’” said Taub.