Skip to content
Posted in News By Stuart LiveseyPosted on May 10, 2010September 14, 2018Tagged hybrid Camry, hybrid camry in targa tasmania 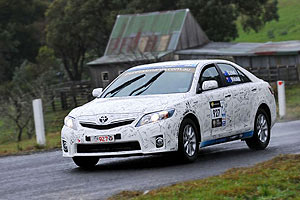 After the fun we had during our road test of the Toyota Hybrid Camry we’re not surprised that the Hybrid Camry took out a class win in the Targa Tasmania.

The Australian-built Hybrid Camry was making its world motorsport debut in the six-day even and it took out the hybrid category.

Adding to the sweetness of victory in the red-blooded international motorsport contest, the Hybrid Camry’s overall fuel economy was just 8.0 litres per 100km – a remarkable achievement.

The class-winning car covered more than 2000km, including competitive stages where speeds reached more than 180 km/h.

Driven by journalist Peter Whitaker and advertising agency proprietor Keith Blanket, the Hybrid Camry was instantly recognisable on the roads of Tasmania – and not just because of its hybrid badges.

The body’s pearlescent white paint was covered in thousands of signatures of Toyota employees involved in building and selling Hybrid Camry in Australia.

Whitaker said the car benefited from its petrol-electric hybrid technology, with energy generated by the brakes and wheels being converted into electricity and stored in the battery for later use.

“We could have gone faster on some of the competitive stages, but we were focused on using as little fuel as possible,” he said.