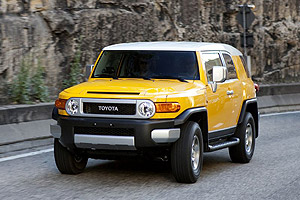 With looks like no other SUV, FJ Cruiser comes to Australia with a pedigree that stretches back 50 years to the legendary FJ40 LandCruiser and he modern FJ Cruiser captures this heritage with its body-on-frame structure, short wheelbase, stocky appearance and the arrangement of its headlights and grille.

But the FJ Cruiser is more than just rugged looks. It’s equipped with a powerful engine, dual-range 4WD, excellent ground clearance and ample suspension articulation that will enable it to live up to the reputation of the early FJs.

“FJ Cruiser has loads of character that isn’t found in any other SUV, let alone one that is built for off-road terrain,” Mr Buttner said.

“It will be a lot of fun to own and drive, satisfying those who want a modern vehicle with the boulder-crawling spirit of Toyota’s legendary off-roaders,” he said.

In the United States, the FJ Cruiser has recently been awarded for its quality and its value.

In the J.D. Power and Associates 2010 Initial Quality Study, it was rated at the top of the Compact Crossover/SUV segment.

FJ Cruiser was also named best-in-class for mid-size SUVs in the 2010 IntelliChoice.com Best Overall Values of the Year Awards.

Australian models will be produced in Japan and we’ll get our first look at the vehicle at the Australian International Motor Show to be held in Sydney from October 15.