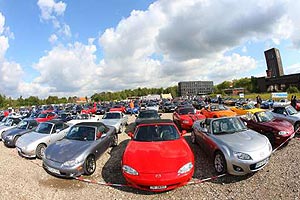 Some people may think that the Mazda MX-5 is a rather forgettable sports car but then if you think that it’s fairly obvious that you don’t actually own one and don’t appreciate what Mazda says has become a cult car.

It’s also quite likely that you missed the memo that reveals that the Mazda MX-5 is the world’s best selling two-seater roadster with over 850,000 being sold since they were first released in 1989.

Despite all that I don’t quite see the MX-5 as having quite the same cult status as the Citreon 2CV but … maybe it will come in the years ahead.

Anyway, however you look at the Mazda MX-5 there’s no doubt that people who own them love them and like to get together with other MX-5 owners and now they have their very own world record reconised by the Guinness Book of World Records.

On 18 September 2010, 459 officially recognised vehicles formed the longest continuous MX-5 parade of all time at the grounds of the UNESCO Zollverein World Heritage site in Essen, Germany – clearly breaking the former world record of 249 vehicles set in New Zealand.

“The excitement leading up to this event was amazing,” said Jeff Guyton, President and CEO Mazda Motor Europe. “Over 600 MX-5 owners applied to take part; so many that we didn’t have room for them all because of technical reasons. The event, the parade, the many visitors – Mazda MX-5 showed today why it’s still one of the best-loved sports cars on the planet.”

The last seats in MX-5 world record parade were auctioned off at eBay for a good cause. This included co-pilot next to German actor Ralf Bauer, and one other Mazda MX-5. The auction for these coveted slots raised about $2,000, which Mazda Germany increased to $4,000 and donated to SOS Children’s Villages. 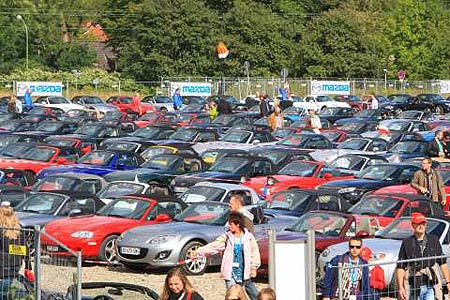 Cars from 17 countries took part in the world record attempt, with the lion’s share of parade participants coming from Germany. Several awards were handed out during the day’s entertaining program and at the party that followed setting the world record.

The furthest distance to the parade with 2,800km was an MX-5 from Moscow which attended with a group of nine other Russian MX-5s. The oldest MX-5 award went to a car that was 21 years and two months old from Prague, and the MX-5 with the highest mileage of 344,624km came from Switzerland.