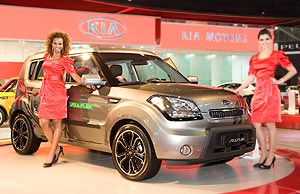 Kia has just launched the Soul Flex – a flexible fuel vehicle that can run on 100 percent petrol … an ethanol/petrol mix … or 100 percent ethanol.

The Soul Flex has been especially designed for the Brazilian market where vehicles that will operate on an ethanol/petrol mix account for more than 85 percent of new car sales. That high percentage should come as no surprise … in Brazil ethanol based fuels are priced 40 percent below petrol and vehicles that can handle straight ethanol or an ethanol/petrol mix attract a lower sales tax.

Despite being designed to run on anything up to straight ethanol the new Kia Soul Flex has 3.2 percent more power and 3.7 percent more torque than previous models and it’s also 44 percent more fuel efficient too.

To achieve those sort of figures Kia engineers made changes to the fuel injection and catalyst systems as well as altering the engine compression ratio.

Of course ethanol based fuels are not as gentle on some parts of a car as normal petrol is. In fact Kia describes ethanol based fuels as being abrasive and to cope with that abrasive fuel Kia has had to reinforce the fuel pump, pillar cap and fuel lines as well as fitting what they describe as “a gasoline tank assistance system” to assist with engine ignition at low temperatures.

The first of the new Kia Soul Flex models will go on sale in Brazil early next year and Kia plans on introducing a Kia Sportage Flex at the end of next year.

And why is Kia launching these vehicles in Brazil? Well it’s not just the tax breaks that make the market so attractive. It seems that the Brazilian people have a love affair going with Kia and sales of Kia vehicles in Brazil are skyrocketing.