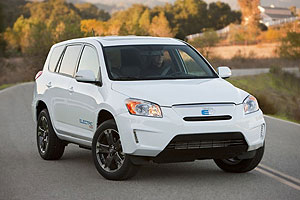 The Toyota RAV4 EV as it’s known was developed by the Toyota Motor Engineering and Manufacturing North America (TEMA) Technical Center in Michigan in conjunction with Tesla.

While the RAV4 EV is most definitely a Toyota product the battery, as well as other related parts, was built and supplied by Tesla.

This Toyota RAV4 EV is just the first of 35 vehicles that will be built for a demonstration and evaluation program that will run throughout 2011 and we can expect to see the first production RAV4 EV on the roads in 2012.

Toyota claims that the RAV4 EV will have a range of 160km despite the fact that the demonstration vehicle is around 100kg heavier than the current RAV4 V6 and yet still manages to achieve similar acceleration figures as a conventionally powered RAV4.

Other problems that Toyota had to address with the RAV4 EV revolved around the balance of the vehicle. When you remove the engine and add in a heavy battery pack the weight distribution is changed and that impacts on ride and handling characteristics.

Those changes have led to alterations to the steering and suspension as well as the relocation of some major components.

The demonstration vehicle Toyota is currently testing is powered by a lithium metal oxide battery with useable output rated in the mid-30kwh range but that may change by the time the RAV4 EV goes into production.

The electric RAV4 won’t be the only Toyota arriving in 2012. Toyota is also planning on launching the Prius PHV (plug-in hybrid) and a small EV commuter vehicle in 2012 and not long after that we may see a Toyota powered by a hydrogen fuel cell.