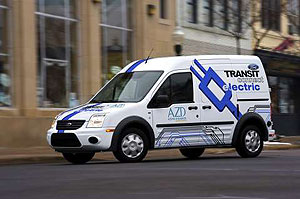 Ford’s new Transit Electric Van has gone into production … well in a very limited prototype kind of way. Take one look at the “production line” photos and you’ll see what I mean.

Despite the fact that these are only prototypes the fact that they are being built is very exciting news for delivery van owners because it is happening and there are businesses out there who are willing to try the vans out in the real world.

The all-electric commercial vans, built on the Ford Transit Connect vehicle body, are equipped with Azure Dynamics’ patented Force Drive™ battery electric powertrain, and assembled by AM General at its facility in Livonia, Michigan.

To date, all initial units have designated customers. Azure Dynamics’ LEAD customer program includes seven companies that are taking delivery of their first units in 2010. The rest of their orders will be filled in 2011. 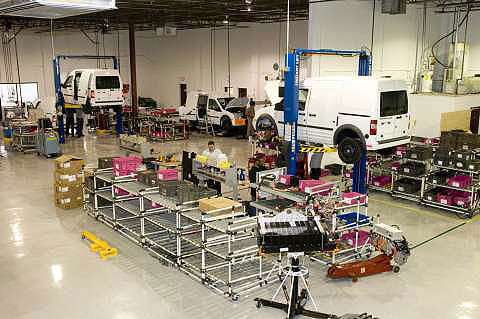 In addition to delivery of units to LEAD customers in North America, the Transit Connect Electric commercial van is headed to the United Kingdom.

The program, supported by Scottish and Southern Energy, utilises a fleet of zero-emissions vehicles for the energy company, with designated drivers to test vehicle and infrastructure technology.

The consortium of Ford, Scottish and Southern Energy and the University of Strathclyde will provide Transit Connect Electric vehicles and a charging infrastructure in and around the London suburb of Hillingdon during 2010 and 2011.

Technical Details
The all-electric Transit Connect Electric has a driving range of up to 80 miles (128km) on a full charge and while that may not sound like much it certainly is ideal for fleet owners who have well-defined routes of predictable distances and a central location for daily recharging.

Owners will have the option of recharging Transit Connect Electric with either a standard 120-volt outlet, or preferably a 240-volt charge station, typically installed at the user’s base of operations for optimal recharging in six to eight hours.

A transportable cord that works with both types of outlets will be available for convenient recharging at either voltage. A charge port is located above the passenger-side rear wheel well. 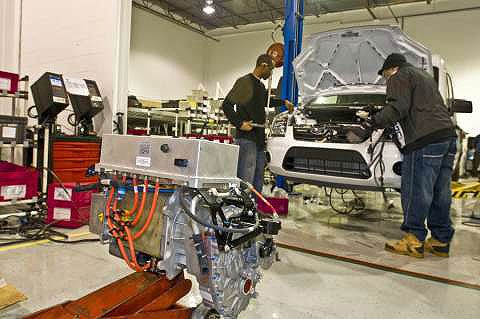 The onboard liquid-cooled 28kW-hour lithium-ion battery pack is charged by connecting the charge port to a power outlet. Inside the vehicle, an onboard charger converts AC power from the electric grid to DC power to charge the battery pack.

When the vehicle is operating, battery power is provided to the drive motor through the electric powertrain’s motor controller.

The motor controller uses throttle input from the driver to convert DC power supplied by the battery into three precisely timed signals used to drive the motor.

The onboard DC/DC converter allows the vehicle’s main battery pack to charge the onboard 12-volt battery, which powers the vehicle’s various accessories, such as headlights, power steering and coolant pumps.

In Transit Connect Electric, the Johnson Controls-Saft battery pack into the vehilcle without compromising interior passenger room and cargo space and it is expected to last the life of the vehicle.

Either commercial vehicles don’t last as long as sedans and other vehicles or Ford and Azure have jumped well ahead of the competition when it comes to battery life.