Skip to content
Posted in Toyota By Stuart LiveseyPosted on May 20, 2011September 13, 2018Tagged Toyota, Toyota Aurion 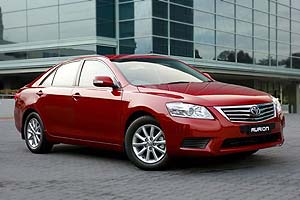 So in the latest NRMA survey the Toyota Aurion is the most economical car in the large family car class with running costs of just 79.68 cents per kilometre That’s pretty impressive for a car that’s powered by a 3.5-litre V6 engine producing 200kW of power but if you’re wondering what exactly a Toyota Aurion looks like then you’re probably not alone.

The Toyota Aurion has been around for a few years now and despite the fact that it’s built here in Australia it’s not exactly filling up the parking lots. However that doesn’t mean that the Toyota Aurion is not all that successful for even though it may not be filling the local parking lots it is filling car transporters as they said for the Middle East.

So what do you actually get in a Toyota Aurion?

The fuel tank holds 70 litres and the recommended fuel is 91 RON unleaded.

The engine
The Toyota Aurion is powered by a Dual VVT-i (variable valve timing with fuel injection) alloy V6 engine combined with a six-speed auto box that is standard across the range. That’s a combination that delivers fuel economy of 9.9L/100km on a combined cycle along with 200kW of power at 6,200rpm and 336Nm of torque at 4,700rpm.

The range
There are seven different models in the Aurion range starting at the AT-X … a car that features a lot of gear as standard equipment.

Electric mirrors, dusk-sensing headlights, air conditioning with rear outlets (climate control on all but the AT-X), six-speaker sound system with MP3 compatibility, Bluetooth connectivity, electrically adjustable driver’s seat with lumbar support, remote central locking are just some of the features that are standard on the base model.

Standard safety features across the range include ABS, EBD, Brake Assist, Vehicle Stability Control, Traction Control, 6 airbags and seatbelt pre-tensioners and force limiters for the driver and front-seat passenger. A reversing camera is an option on the AT-X and standard on all other models in the range.

If luxury is your thing then there are three levels in the Aurion range starting with the Prodigy and moving up to the Presara and finishing at the top-of-the-range Aurion White LE.

While the basics are the same across the range the differences appear when you begin to look at trim levels and some exterior features and as you would expect. Leather accented interiors don’t appear until you get to the Prodigy and surprisingly the sound system seems to remain the same across the range although you do get a CD stacker in every model but the AT-X and a satellite navigation system isn’t standard until you reach the Presara.

Toyota’s approach to the Aurion is interesting. You will see some advertising in various forms of media but other Toyota products get more exposure. Even finding suitable photos of the Aurion in Toyota’s press area isn’t all that easy and the photos you see here are all from 2009.

Perhaps that’s why the Toyota Aurion isn’t filling up the local carparks. 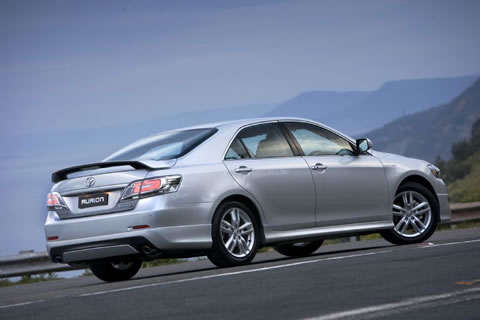