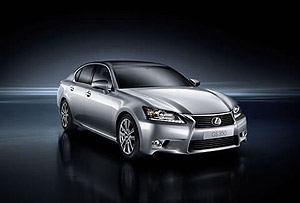 Lexus has unveiled the new GS 350 and it’s certainly one eye-catching car. In a nutshell the new Lexus GS 350 features new technology, a new engine, all-new design and more space inside the vehicle with almost no increase in exterior dimensions.

The new GS 350 also draws on the Lexus LFA to give drivers a better driving experience through better handling and suspension, faster gear changes in the transmission, improved seating … and distinctive engine sounds and exhaust notes.

Hey if you’re going to drive an expensive sporty car then you don’t want it to sound like a Prius do you?

Lexus wanted to improve the basic platform in the new GS 350 and they went to great lengths to do just that.

After extensive testing engineers decided that there should be more spot welds in the chassis along with extra laser welds in “very specific locations” to improve torsional rigidity. Lexus also increased the track by almost 50mm at the rear and 40mm at the front. Design changes were also made to the upper and lower control arms.

New multi-link rear suspension has also been added and all those changes have meant that the shock absorbers can now use a lighter oil and that allows them to move more easily and respond quicker. 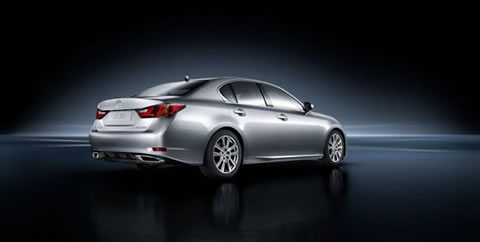 The engine and transmission

The new Lexus GS 350 is now powered by a 3.5-litre all-alloy quad-cam, multivalve V6 that features dual Variable Valve Times with “intelligence”. The new engine produces 233kW of power … an increase of 50kW over the previous model … and that will drive the GS 350 from 0 to 100km/h in just 5.7 seconds.

The transmission includes a number of features from the Lexus IS F high-performance sedan. These features include faster shifts between gears, earlier torque converter lockup and downshift when you tap the accelerator.

The transmission has four modes ranging from ECO for those who want to get better fuel consumption through to Sport S when you really want to enjoy all the features of the high-powered engine and Sport S+ where handling enhancements via a sport setting of the adaptive variable suspension, variable gear ratio steering system, and vehicle stability control (VSC) together come into play.

The Sport S+ mode is only available on some GS 350 variants. 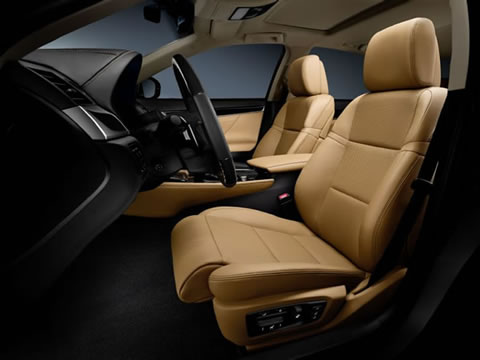 Seating for front-seat occupants has been improved with the addition of a redesigned seat frame and changes to the design of the steering column. These changes improve the seating position for drivers and give added comfort and better forward visibility.

Rear-seat passengers haven’t been overlooked and there’s now more headroom and legroom that was available in the previous model. Door openings have also received some attention and boot space has been increased by almost 25 per cent.

There’s also a new analog clock with LED indicators and new white LED lights that sequentially illuminate the areas around the doors, console and foot wells. 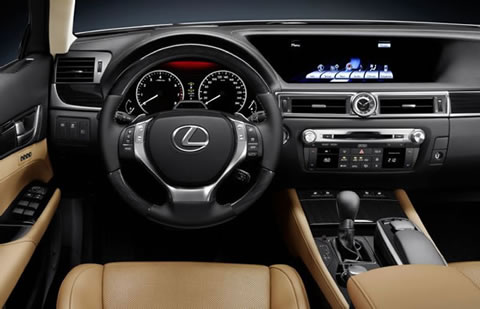 The new Lexus GS 350 features a split-screen 12.3-inch display that is big enough to display a map as well as other information such as audio, climate etc.

The new GS 350 comes with all the standard steering and braking safety features plus 10 airbags to protect all occupants.

There’s also a pre-collision system that uses dynamic radar cruise control to provide early warning of anything that could collide with the car plus an infrared camera to monitor the driver’s eyes and check his or her status.

If the driver is not looking forward when an accident appears to be imminent the pre-collision system will start warning the driver sooner than if the system detects that the driver can see what might be about to happen.

If the driver does not respond to either warning the system will begin to apply the brakes.

Other safety features include a Heads Up Display and a Blind Spot Monitor . 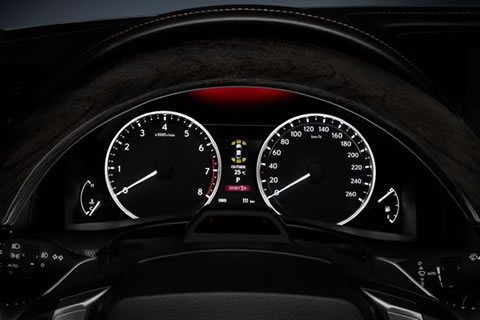 There first of the new GS 350 models was unveiled in the United States towards the end of last month and Lexus are yet to announce when the new model will be released here in Australia. Prices and final equipment levels are also yet to be announced.