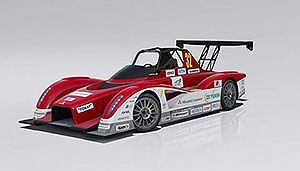 When we think of Mitsubishi and electric vehicles it’s easy to fall into the trap of thinking about their little urban runabout … the i-MiEV … but there’s a lot more to Mitsubishi electric cars than that and this year we’re about to see something a whole lot bigger take on Pikes Peak.

Pikes Peak is the internationally famous hill climb track in Colorado and this year Mitsubishi wants to do better than the second place in the Electric Division that they achieved last year. This year they’re aiming for overall first place.

To achieve that outcome Mitsubishi are taking their MiEV Evolution II to the Peak and it’s going with specially designed high-output motors powered by high-capacity battery.

All that power will be controlled by S-AWC (Mitsubishi’s acronym for super all-wheel control) integrated vehicle dynamics control system that will control a front and rear drive train with a motor for each wheel which obviously makes this a 4WD.

Along with the S-AWC the Mitsubishi MiEV Evolution II comes with active yaw control to give the vehicle added cornering capability … active stability control that automatically controls brake force to each wheel.

There’s no doubt that it’s a serious piece of machinery that can really accelerate … but when you watch the video of the final tests before Mitsubishi shipped their MiEV Evolution II off to America there’s one thing missing.

There’s just no engine noise … there’s no roaring exhaust … nothing terribly exciting at all … but it sure does go.