The Volvo Estate Concept has me worried … either that or I’m getting old … because I’m beginning to like the look of the latest vehicles coming out of Sweden.

Of course the yellow box has been gone for years (although my brother-in-law still owns one). Despite the fact that it was so last century it still lingers in the back of my mind and sends cold shivers down my spine whenever I hear the word ‘Volvo’ mentioned.

It’s hard to accept that such a sleek looking piece of the car maker’s art could possibly be related to those ugly yellow boxes … but they are and the Volvo Estate Concept is the latest offering.

But you do have to ask yourself … who would want a 2-door station wagon? 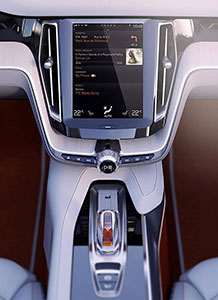 Perhaps the answer to that one is that this concept will probably never see the production line and it’s not the body that’s important here but the interior … and more particularly … the dashboard.

Gone are the usual buttons, switches and knobs … and that’s got to be a good thing because they become confusing … distracting … and downright dangerous.

In the last couple of years there seems to have been some sort of competition running between manufacturers to see just how many buttons they could add to the dashboard of each new car but perhaps Volvo has called a halt to all that.

In the Volvo Estate Concept almost all those buttons are gone … they’ve been replaced by one large tablet-like touchscreen in the centre console. Sadly that could be just as distracting but what can car makers do … apart from introducing voice control that’s more than just cosmetic?

The only buttons that remain on the dashboard of this concept are the volume and play/pause on the sound system (something that Volvo describes as “crucial), hazard warning lights and window heaters.

And what’s that in the back of the Volvo Estate Concept? It’s all the pieces you need to play the Swedish game called ‘Kubb” and if you don’t know the rules then you will find them printed on the transparent floor. 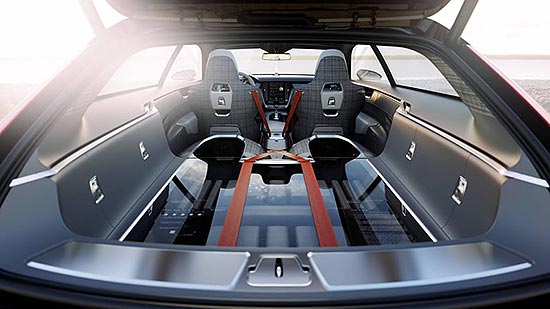 As I said at the start, it’s not the body … or the game of Kubb and its transparent floor that we’ll see in the near-future … it’s the dashboard and that touchscreen that we may see in Volvos on the production line.