It may not be widely known but Kia and Hyundai are both owned by the same parent company. Although the marketing of both brands is kept entirely separate and here in Australia it would be rare to find a Kia dealership and a Hyundai dealership under the same roof there is a lot of Hyundai parts appearing under the bonnets of Kia motor vehicles.

Some motoring writers would even suggest that most Kia models are simply a cheaper version of Hyundai models once you remove the outer skin. So it’s not surprising that Kia often attracts lots of positive comments from motoring writers. 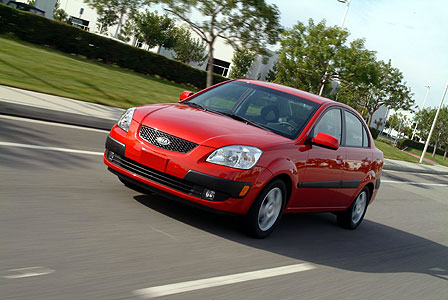 The latest Rio is no exception; at least here in Australia where the vehicle is a real contestant in the small car market. The inclusion of power windows, front and side airbags, CD player and reclining rear seats with variable settings are just a few of the features that come in the latest Rio.

As one writer has pointed out, some of those features aren’t included in larger vehicles that cost twice as much as the Rio.

Rio comes equipped with a zippy 1.6 litre motor that is coupled to either a five speed manual or a four speed automatic box. Reverse is selected by lifting a collar on the gear lever and some people do have trouble with this feature. Others have found the gear box to be a little clunky and one American motoring writer described the gear changing in the latest US version as “disappointing”.

Visibility from the driver’s position is good and when that is added to the small 5 metre turning circle you have a car that is ideal for city driving.

Leg room in the front seats is excellent but, as you would expect, it’s a little cramped for adults in the rear seats. Boot space is excellent even though the Rio comes equipped with a full size spare wheel. 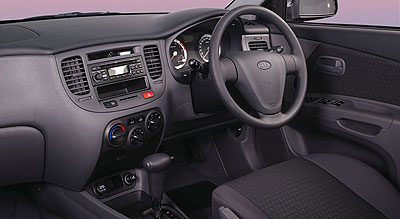