Skip to content
55 Comments on A Wicked CamperPosted in Campervans, General News By Stuart LiveseyPosted on December 27, 2005September 17, 2018

I have the good fortune to live in Hervey Bay, one of the most beautiful spots on the planet and a magnet for backpackers from all over the world.

Some backpackers come by bus, some come by air, a few probably even walk but the most noticeable of all come by Wicked Camper.

I’ve often seen these campers around town and finally today I managed to grab a photo of one. 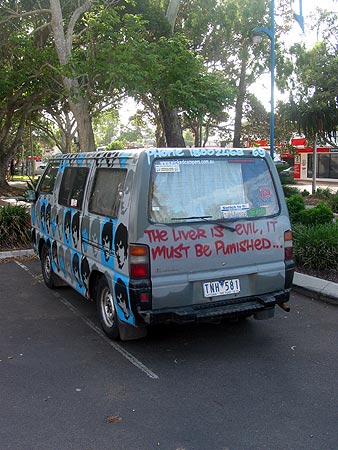 The message on this van is fairly mild when compared to some that I’ve seen but it still managed to attract a lot of attention.

Wicked Campers have their own website at http://www.wickedcampers.com.au and you’ll see just how wicked you can get in one of these campers with attitude.

These campers are definitely not aimed at the average family or even a couple of retired oldies. Instead they’re aimed at backpackers who want to travel in style. While the vans could not be described as luxurious they certainly are well equipped for up to three people who like to sleep cosy.

Wicked Campers have depots spread throughout Australia and their rates are very reasonable.

55 thoughts on “A Wicked Camper”