Skip to content
Posted in General News By Stuart LiveseyPosted on March 4, 2006September 17, 2018

My wife and I attended the Brisbane Motor Show on the opening day. Some things surprised us, some things disappointed us but overall we certainly came away thinking that we will be back next year. 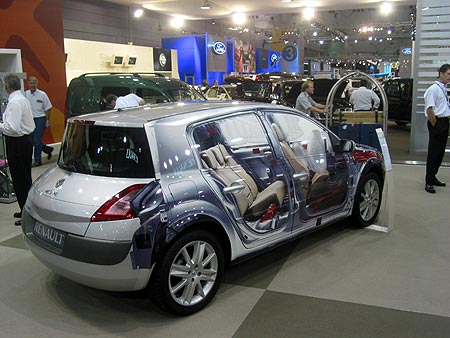 Here are some random thoughts:

The weather wasn’t good on the opening day but we still expected to see more people attending. We had no trouble taking photos without others walking between us and the cars.

Some manufacturers had obviously come to sell while others had obviously come to be seen? I understand that some of the high-end cars like Maserati, Ferrari and Lamborghini aren’t for the likes of mere yokels like you and me but even so it would have been nice to have them a little closer to the crowd barriers. The closest you could get to some was with a telephoto lens.

If you went looking for concept cars you would have been disappointed as there were really only two. The EffieJ and a Ford 4wd SUV/Ute that didn’t look much like a concept car at all.

If you’re going to display your exotic Australian made sports car you really need to have someone there who wants to talk to the crowd about it. A bored paper-reading temp who also doubles as the collectibles salesman is just not going to cut it.

If you go to just look at the cars you might find it all a bit boring but if you engage some of the sales people in conversation you will learn some interesting facts about some unusual cars.

Nissan obviously thinks that it’s exciting to raise and lower the top on their convertible as they made PA announcements about it every time they did it.

Nissan was supposed to have their 350Z concept car there but it certainly wasn’t obvious and I missed it completely.

Don’t take your wife/girlfriend unless you are prepared to find out that she really would like an orange and black Harley chopper fitted with a chrome skull for headlights for Christmas.

At the time we were there the Holden and Ford stands were among the most popular while few people seemed interested in the Mitsubishi stand – are they already dead but just haven’t realised it yet?

You have to wonder why some cars bother with rear seats because a legless dwarf wouldn’t be able to sit in them.

We took some great photos, we learned some interesting facts, we saw a few cars we would definitely like to own and many that made us drool and if we had gone with our cheque book we might have driven away in a Renault … or a Citreon … and she did like that chopper but they can definitely keep the latest Grandeur.

The motel we stayed at in Kedron was comfortable but the owner was far noisier than any guest and seemed to get off on abusing female guests in the room next to ours at the top of his voice. I don’t really care that he’s been running the motel for 11 years as there are quieter ways of dealing with problematic guests than screaming at them at the top of your voice. We won’t be staying at that one next time.