Towards the end of this year Dodge will be making a return to the Australian market with a range of vehicles. The first to be released will be the Caliber – an unusual vehicle that doesn’t quite seem to be one thing or another.

Dodge, that great American institution of innovation and cool tough looks, has taken it upon itself, as a company, to create the Dodge Caliber a “Neon-replacement mini-SUV” car. With good fuel economy, spacious interior and improved safety features, it’s the SUV of the future right? Well, I don’t think so, and I am going to tell you why.

First things first, the good stuff, the Caliber does in fact get pretty good fuel economy with most models of it getting 28 mpg city and 32 mpg on the open road, so it gets respectable gas mileage for something that’s supposed to be an SUV. I think I can back out of my driveway in my full sized, 5 door Ford Explorer on a gallon of gas, so 28 mpg sounds great to me.

And they seemed to have taken safety with this thing pretty seriously as well, with side curtain air bags and advanced multi-stage airbags in the dash, it’ll be a comfortable slide into the windshield at 70MPH if you happen to be so unfortunate. Headlights on this thing are huge and fog lamps come standard on one model and optional on another cast a low wide beam for added visibility. 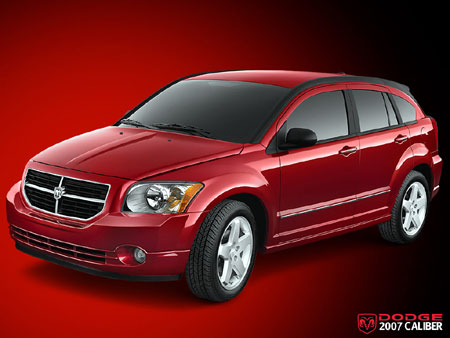 Now on to spaciousness, when I think of an SUV space is one of those things that comes immediately to mind. I can toss a 4 foot by 8 foot sheet of plywood inside my explorer and it will fit.

Now on to how I really feel about this mutation of an SUV. This is not a true Sport Utility and you can tell by the things they hype about this vehicle. Rims, sound system, cool looking headlights are not what I would call features that a serious SUV buyer is looking for. And to top it off you’re going to need all those safety features because Dodge decided to throw in so many distractions you’ll get a fender bender leaving the garage.

an in dash beverage cooler, ok if you just said “how cool”, leave now,

a holder for your mp3 player or cell phone in the center arm rest,

and a “golly gee, look at this”: lighted beverage holders!

Toss in the mp3 jack on the dash, the DVD driven navigation system, and a radio that you will find yourself fiddling with for far too much time, and you get to test the theory all on your own that the number one cause of accidents isn’t alcohol, but people distracted by other things while they are driving.

Overall Dodge has put a lot of time and money into producing a car that is in no way any sort of a sport utility vehicle. This thing couldn’t even with any self respect call itself a station wagon. If you closed the doors on the Caliber you could probably fit it inside an average US station wagon.

If you’re in the market for an economy car this may work out for you, but as an SUV, even a mini one, it is a sad excuse of a vehicle.

An American’s View of the Dodge Caliber