Honda has announced plans to have a completely new manufacturing plant on line in 2009 to produce 150,000 Civics and Fit models for the North American market. Reports suggest that the new plant will have the capacity to increase production to 300,000 models a year bringing Honda’s total capacity in North America to something around 1.8 million units a year.

Kia hasn’t been sitting back and taking things easy either. It’s currently in the final stages of bringing this large plant online in Zilina, Slovakia. It’s Kia’s first plant in Europe and construction has cost around one billion Euros. 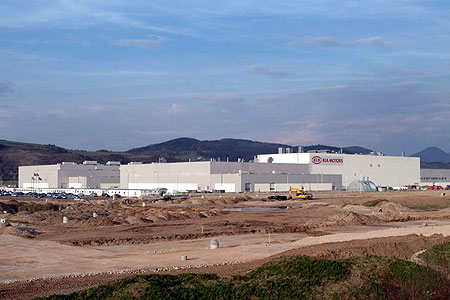 When the plant is in full production it will be working round the clock to produce 300,000 units anually

Hyundai also has a new production facility in Europe.

Kia Expands Into Europe and Honda Expands in America