The 2006 Kia Rio/Rio5 ranked highest for initial quality in the sub-compact category according to the J.D. Power and Associates 2006 Initial Quality StudySM (IQS). The annual report, released yesterday, measures 217 vehicle attributes across eight categories, including driving experience, engine and transmission, and a broad range of quality problem symptoms reported by vehicle owners.

In the study, the Kia Rio was honored as the highest-ranking model in a tie in the sub-compact segment at 137 problems per 100 vehicles (PP100). The all-new 2006 Kia Sedona minivan also performed well in its first year of release, while the Kia Sportage compact SUV scored better than the industry average. 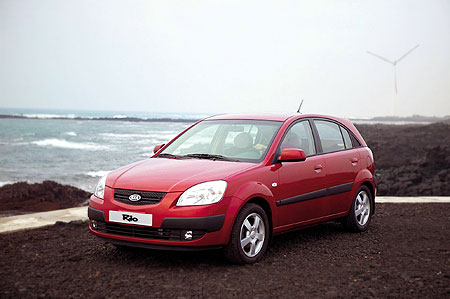 The all-new 2006 Rio sedan and Rio5 five-door are raising the bar in the entry level segment by offering class-leading horsepower and interior volume, and six standard airbags, including full-length side-curtain airbags. The Rio and Rio5’s longer wheelbase and increased width and height contribute to a best-in-class 92.2 cubic feet of passenger room and both body styles feature a long list of standard equipment.