Could it be something out of H.G. Wells’ “War of the Worlds”? Actually, these mechanized vehicles and those that drive them “come in peace,” as hundreds of Volkswagen New Beetles trek to the New Mexico desert for the 7th Annual Roswell New Beetle “2K Car Show Weekend,” June 23 to 25, 2006.

This year, Volkswagen of America, Inc. will bring in a number of New Beetles, including the Teacher’s New Beetle, produced for the NEA (National Educators Association), whose surface acts as a dry erase board, allowing teachers to write on the car and then wipe it clean for the next lesson.

Also on hand and poised for stargazing: Volkswagen’s iconic Rabbit. The new Rabbit features a powerful five cylinder, 2.5 litre, 150 hp engine and is available in both two and four-door versions, . The Rabbit was the first Volkswagen produced in the United States and its appeal grew rapidly, with sales of over 1.3 million in its 10-year lifespan. The new Rabbit is darting into showrooms nationwide now.

Last year’s event drew thousands of attendees and more than 250 New Beetles from 34 states and Canada. This year’s caravans hail from all over the continent, including: Denver, Houston, San Diego, Seattle, Toronto and Washington, D.C.

The Roswell 2K event originally grew out of two significant New Beetle occurrences. The first was the online frenzy generated by the carâ€™s official launch in 1998. As new cars left dealer showrooms for the open road, Volkswagen enthusiast websites excitedly “buzzed” with initial New Beetle “sightings” from across the country.

In 1999, the idea for an event and its Roswell setting were firmly cast with the airing of a New Beetle commercial which stated (tongue firmly in cheek) that the car was “reverse-engineered by UFOs.”

Held in Roswell, N.M., famous for a 1947 UFO crash that was reported then later denied by the U.S. military, the three-day weekend of activities is the largest New Beetle celebration in the world. 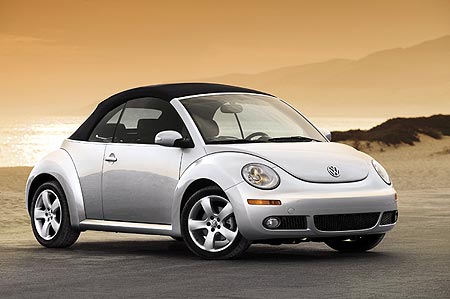 An Invasion of Beetles