When Kia’s designers created the cee’d, a sporty hatch, they set out to maximise the differentiation between the five-door and three-door cee’d models as much as possible, without losing the family likeness.

Exterior: the same, but strikingly different 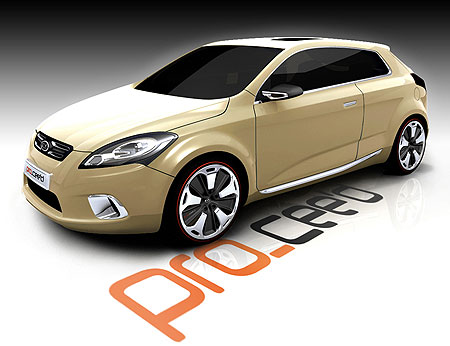 “Colour plays an important role in generating the bold image of the pro_cee’d concept. We call the exterior colour “Cashew” and it is a daring colour for a showcar” observed Gregory Guillaume, Chief Designer Kia, European Design Centre.

It looks almost solid, but does have a small percentage of metal flakes that give a discreet sparkle. I think the colour works well in contrast with the bright metal and dense matt black elements of the exterior like the door mirrors and the special road wheels, and shows off the car’s solid forms to perfection.

Key attributes which the pro_cee’d and sporty hatch models will have in common include the lowered roof line (down by 25 mm compared to the five-door cee’d) and shallower side windows ringed in chrome trim that create a robustly sporty window graphic. 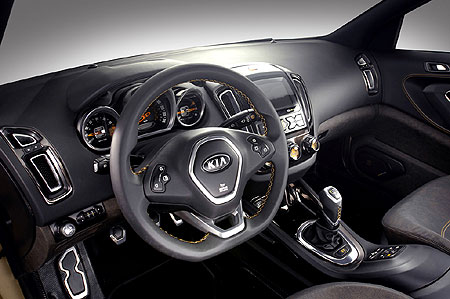 The pro_cee’d interior is designed to accommodate four people and is trimmed to give a strong “performance” feeling with deeply matt surfaces. Like the exterior, the cab uses bright metal and dense matt black elements, but in the interior these appear to “float” amidst areas of contrasting leather trim.

In the earlier Geneva Kia cee’d showcar this “floating” effect was one of elegant sophistication, in the pro-cee’d the feeling inside the cabin is very different, bolder, tougher and more racy. The four seats feature bucket-style backrests with aluminium alloy mountings for the head restraints.

Facing the driver, the three recessed dials of the instrument panel have separate metal cowlings set beneath a top cowling that also appears to “float” above the dashboard. The short, leather-shrouded gear lever is set in a bright metal surround topping a black centre console that rises between the front seats to position a battery of minor switchgear within easy reach of the driver.

The dense matt black trim of the upper dashboard is continued around the upper sides of the cab. The lower panels are trimmed in special “distressed” leather that has a black/brown patina, the quality of an “old flying jacket leather with a history and a story to tell” as Guillaume enthuses.