Skip to content
Posted in General News By Stuart LiveseyPosted on April 4, 2007September 17, 2018

The idea of building concept cars has been around for many decades. You know how it goes, build something really way out that looks and goes like a rocket but when it comes to production time turn out something that’s not going to make waves and not going to make all that many sales either.

That idea was in vogue as far back as 1958 when Plymouth built this concept car. 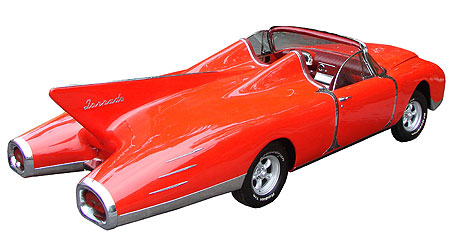 The Plymouth Tornado was one of a kind and featured a futuristic design that’s probably still a long way in the future today.

Unlike many concept cars that end up being scrapped or hidden away where no one will ever find them the Plymouth Tornado did manage to escape into the wild. It was sold at auction in the United States last November by Red Baron’s Antiques.

The Plymouth Tornado – a Blast from the Past