Great Wall … it may not have the same ring as Holden, Falcon or any of the other major car manufacturers but I have a suspicion that you’re going to be hearing a whole lot more of it in the very near future … in fact you’ll probably start hearing more about it this week.

While Great Wall may not have much of a ring to it … and Wingle definitely doesn’t give you a subconcious image of strength and reliability … those are the names that you are going to be hearing about as Great Wall launches it’s first vehicle in Australia during this coming week.

Unlike most new manufacturers who launch in Australia with a sedan Great Wall is launching with two 4-door utes. The Wingle shown hereÂ is theÂ 2.4 litreÂ version and the two-wheel drive version will start here at around $23,990 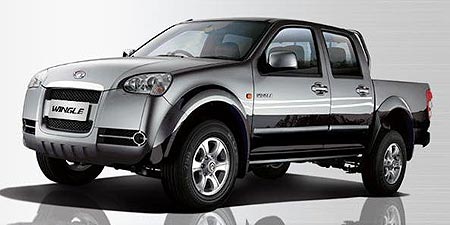 This version will have a 2.4 litre petrol engine – 5 speed manual – leather seat trim – airconditioning – power steering – central locking but no airbags. The 2.2 litre version will have the same specs but will start at $19,990. 4WD versions will also be available

And that price point is the reason that you will be hearing more about them. At that price and roadside assistance on a three year warranty these utes will look rather attractive to your average cash-strapped tradie.