… you wouldn’t want to scare the horses or the drivers now would you?

Regardless of who wins the race to put an electric car in the showrooms the chances are that what you see in the concept won’t be anything like the vehicle you end up being able to buy. Many manufacturers believe that selling electric technology to new car buyers is not going to be easy and the more cutting edge it appears to be the harder the sell will be.

That’s why Ford in the United States have made a conscious effort to reduce the visual impact of the first electric car it will have in the showrooms from 2011. The Ford Focus BEV (short for battery electric vehicle) couldn’t look more reassuringly plain. 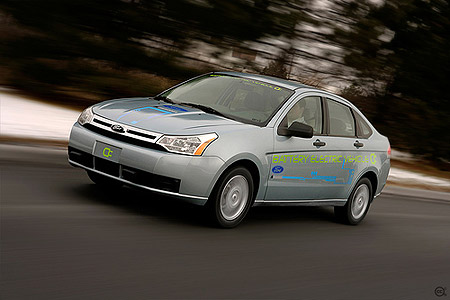 Even its acceleration has been toned down so as not to alarm consumers. An vehicle powered by electricity has all of its torque available the moment you step on the accelerator but, because they don’t want to scare consumers away, Ford has made sure that their Focus BEV doesn’t accelerate any harder than the petrol model.

Ford also claims that there are some safety considerations in reducing the acceleration of the BEV and of course using less power is going to give the Focus BEV a better range too.