Think of it as an airbag in a rear seat belt. 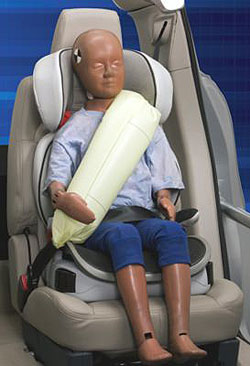 Ford in the US is bringing to market the world’s first automotive inflatable seat belts, combining attributes of traditional seat belts and air bags to provide an added level of crash safety protection for rear seat occupants.

The advanced restraint system is designed to help reduce head, neck and chest injuries for rear seat passengers, often children and older passengers who can be more vulnerable to such injuries.

Ford will introduce inflatable rear seat belts on the next-generation Ford Explorer, which goes into production next year for the North American market. Over time, Ford plans to offer the technology in vehicles globally.

“Ford’s rear inflatable seat belt technology will enhance safety for rear-seat passengers of all ages, especially for young children who are more vulnerable in crashes,” said Sue Cischke, Ford group vice president of Sustainability, Environmental and Safety Engineering. “This is another unique family technology that builds on our safety leadership, including the most top safety ratings of any automaker.”

Safer and more comfortable
Advances in air bag inflation and seat belt construction methods have enabled Ford and its suppliers to develop inflatable seat belts that are designed to deploy over a vehicle occupant’s torso and shoulder in 40 milliseconds in the event of a crash.

In everyday use, the inflatable belts operate like conventional seat belts and are safe and compatible with infant and children safety car and booster seats. In Ford’s research, more than 90 percent of those who tested the inflatable seat belts found them to be similar to or more comfortable than a conventional belt because they feel padded and softer. That comfort factor could help improve the 61 percent rear belt usage rate in the U.S., which compares to 82 percent usage by front seat passengers, according to National Highway Traffic Safety Administration data.

In the event of a frontal or side crash, the inflatable belt’s increased diameter more effectively holds the occupant in the appropriate seating position, helping to reduce the risk of injury.

Vehicle safety sensors determine the severity of the collision in the blink of an eye and deploy the inflatable belts’ air bags. Each belt’s tubular air bag inflates with cold compressed gas, which flows through a specially designed buckle from a cylinder housed below the seat.

The inflatable belt’s accordion-folded bag breaks through the belt fabric as it fills with air, expanding sideways across the occupant’s body in about the same amount of time it takes a car traveling at highway speed to cover a yard of distance.

The use of cold compressed gas instead of a heat-generating chemical reaction – which is typical of traditional air bag systems – means the inflated belts feel no warmer on the wearer’s body than the ambient temperature. The inflatable belts also fill at a lower pressure and a slower rate than traditional air bags, because the device does not need to close a gap between the belt and the occupant.

“It’s a very simple and logical system, but it required extensive trial and error and testing over several years to prove out the technology and ensure precise reliable performance in a crash situation,” said Srini Sundararajan, safety technical leader for Ford research and advance engineering.

The inflated belt helps distribute crash force energy across five times more of the occupant’s torso than a traditional belt, which expands its range of protection and reduces risk of injury by diffusing crash pressure over a larger area, while providing additional support to the head and neck. After deployment, the belt remains inflated for several seconds before dispersing its air through the pores of the air bag