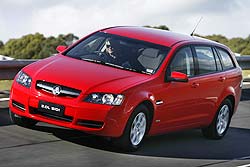 The Holden Commodore has returned the best fuel economy of any standard Australian-built entrant in a grueling 3000 kilometre drive from Darwin to Adelaide.

The 6.48 litres/100 kilometre average achieved by Australia’s best selling car is equivalent to driving 1100 kilometres on a single tank.

The standard Omega Sportwagon, with its all new 3.0L S.I.D.I (Direct Injection) engine and six-speed transmission was 30.33% better than its official ADR81/02 combined test score of 9.3l/100km.

“This is a standard large, six cylinder family car that can deliver fuel economy better than some four cylinder cars.

In the development of the new S.I.D.I engine technology, Holden set out to improve the fuel efficiency of Australia’s best selling car. As a result, the new Commodore offers a 13% improvement over the previous six cylinder engine. (Based on ADR81/02 combined testing).

A team of four Holden employees took part in the Global Green Challenge, a biennial showcase of low emission and alternative vehicles.