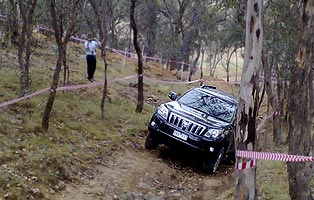 When Todd Connolly from Toyota called me out of the blue a few weeks back and wondered to the Toyota Prado media day I was like a kid waiting for Christmas to arrive … small things like invitations to drive expensive 4-wheel drive vehicles over some very rough terrain always tend to excite me.

So along with 13 other scribblers from a variety of motoring publications we headed out of Sydney on a flight to Orange in NSW early yesterday morning. It was an interesting bunch … there was three or four females and a bunch of males who write for everything from a foodies blog to a gray nomads website and in between there were dedicated 4wd writers and a couple of us who cover just about the whole gamut of motoring interests.

During the day we had a briefing, we had a walk-around, we got taken over three different obstacle coursem some dirt roads, some rugged fire trails and a bit of tar as well. We could ask questions, we could drive everything from the bottom-of-the-line short-wheelbase to the top of the range long-wheelbase.

Now it’s all over we’ve all got some writing ahead of us and I’ve definitely got a new perspective on a vehicle that I thought was probably best suited for soccer moms. Seriously, the new Prado handles off-road conditions very well.

I’ve also got a new appreciation of motoring writers and I have to say that it was the females who were obviously thinking ahead of us fellas.

“Does it have room for a second battery?” The gray nomad writer wanted to know that one … and yes it does.

“Won’t the keyless entry allow people to get into your vehicle at night while you’re sleeping if it’s parked too close to your tent or caravan?” Another gray nomad question … and yes it probably will but the key range is limited.

And there were a number of others from the females who were thinking beyond the end of their noses.

He managed to scare everyone on board and while some of us got the Prados a little loose in some of the gravel on the dirt roads none of us could get the Prado to fishtail.

The real review of the a Prado … and not just the media event .. will be along tomorrow.