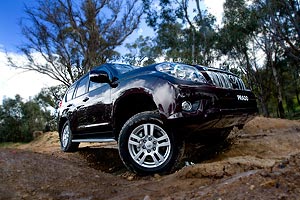 While new car buyers in other major western countries seem intent on down-sizing here in Australia our love for SUVs continues to grow. Sales of new SUVs in Australia were up in October and it seems that this month will be no different. Even the second-hand SUV market is experiencing some shortages as demand for quality low-kilometre vehicles outstrips supply.

The demand for new SUVs … even in the pricey mid-range of the market … has undoubtedly surprised manufacturers and Toyota found itself in an embarrassing position simply ran out of Prados about three weeks before they were ready to introduce the next generation of Prados. While you may think that selling out of an old model would be a good thing for manufacturers it does leave them in the position where impatient buyers simply won’t wait for the new model to arrive and they’re lost to other makers.

The market for new SUVs is so strong in fact that by the end of the year Toyota expects to have sold over 70,000 SUVs in that mid-range area and that’s more than twice as many as were sold in 2002. But who is buying SUVs in Australia?

It seems that demand for SUVs is coming from just about every age group with the largest number of buyers coming from the 30-40 year olds who are looking for something that’s comfortable for a family but also has some towing capacity.

Toyota also sees that there is a strong demand for SUVs amongst younger people and the gray nomads are also seen as becoming interested. That young/old market area does see some resistance to mid-range SUVs though for one major producer has left the 3-door SUV market. However Toyota doesn’t see that resistance and they have just released their 3-door Prado and are seeking to market it as a sports SUV with outstanding towing capacity.

Obviously the word ‘sports’ is going to appeal to the younger market while the towing capacity should appeal to retirees who want to tour the country and tow a caravan or camping trailer behind them.

If the demand for new mid-range SUVs really is there it’s unlike that we’ll see the demand in Australia for SUVs fading any time soon and that leaves us wondering when we’re likely to see the first hybrid SUV appear in Australia that will appeal to the mass market. any time soon.

The Future of the Australian SUV Market