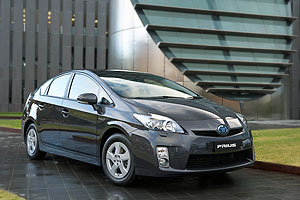 We’re not talking about just automotive research here … we’re talking about which global company spends the most on research in any field. Well it happens to be Toyota who spend around $1.1 million every hour of every day.

Toyota Motor Corporation (TMC) spends more than $26 million a day on research and development (R&D), according to figures compiled by an international management consultancy firm.

The figures show Toyota has been the world’s top R&D spender in each of the past three years among publicly traded corporations.

Booz and Company’s Global Innovation 1000 report examines the 1000 public corporations worldwide that spend the most on researching and developing products and services.

Booz and Company also surveyed almost 300 corporate leaders from 230 companies, which collectively spent more than US$230 million on R&D in 2008. The study revealed that innovation investment is increasingly viewed as essential to corporate strategy.

More than 90 per cent of the executives surveyed said innovation was critical as they prepared for the up-turn. Most had maintained or expanded their portfolios and were pursuing new products to improve growth and margins.

The authors said the recession’s effect on innovation activity had not been as severe as some observers might have anticipated.

“Innovation has become central to every company’s efforts to compete, and the degree of competition has been in no sense reduced by the downturn; if anything, it has been heightened,” they said.

“Long product-development cycles have forced companies to maintain their R&D spending even when revenues decline.

“Most companies are fully aware of the need to be in position to profit from the coming upturn.”

Who Spends the Most on Research?