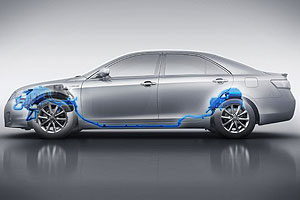 The Prime Minister unveiled the first Australian Toyota Hybrid Camry and marked it as an historic day for the Australian automotive industry and it’s certainly that. In fact it might be the only hybrid that’s ever built in Australia for development costs are huge and they could well be beyond anything that Holden or Ford could afford.

The claims of savings in fuel consumption certainly do make this an attractive vehicle for fleet owners as well as average households.

Toyota’s Australian-made Hybrid Camry will save at least 1100 litres of fuel in a year of city driving* compared with its locally built six-cylinder rivals, according to a senior company executive. Corporate manager of product planning, Peter Evans, said Hybrid Camry’s fuel consumption and emissions would rival small and compact cars.

Mr Evans said fuel economy gains during 20,000km of city driving would save individual motorists at least 1100 litres or $1320 a year, based on a pump price of $1.20 a litre for regular unleaded petrol.

“Those savings will be multiplied by two, 10, and even hundreds for fleet owners – and many of their drivers will save even more by covering far greater distances,” Mr Evans said.

“At the same time, Hybrid Camry – with combined power of around 140kW from its 2.4-litre petrol engine and powerful electric motor – will produce less than 150 grams per kilometre of CO2*.

“That’s the sort of result you’d expect from a car with less than half the power of Hybrid Camry and a much smaller engine displacement of around 1.3 litres.”

Mr Evans said the city-cycle figures were the most relevant comparisons as the overwhelming majority of Australian motorists did most of their driving in urban areas.

He said final testing was expected to confirm Hybrid Camry’s saving on fuel – compared with the most fuel efficient big Aussie six – would be at least 5.5 litres for every 100km* on the official city cycle; an advantage of more than 40 per cent.

“Using the same amount of fuel, a Hybrid Camry could travel at least 175km compared with just 100km for the most efficient six-cylinder car produced in Australia.

“Even on the open road*, we expect the official figures to show Hybrid Camry will use around 25-per-cent less fuel than the best of the local big sixes^.

“Looking at the combination* of city and highway driving, we are confident of recording fuel economy in the low 6.0 litres per 100km range.

“By driving Hybrid Camry, the savings on fuel and therefore on people’s wallets will be huge – and there is also a significant environmental benefit,” he said.

Mr Evans said Hybrid Camry would have many fuel-saving features beyond the combination of its petrol engine and electric motor.

“Our engineers have tuned the suspension and steering for Australian conditions – and they have included technology that improves overall driving performance and safety,” he said.

Toyota is planning to release Hybrid Camry to the market in February 2010.

One thought on “The Australian Toyota Hybrid Camry”