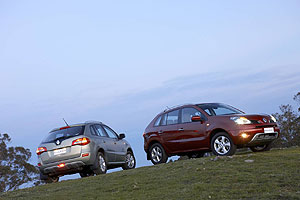 With Australia’s continuing love affair with SUVs it seems that any manufacturer who wants to feed the local demand will make sales but the European manufacturers like Renault and Peugeot are going to have problems overcoming the branding that Toyota, Nissan and Mitsubishi have already achieved.

They may even have to overcome a perception of quirkiness that perhaps lingers in the market place but for Renault the Koleos might just do that (although a different name for the vehicle, models and accessory packs might have given the vehicle even more appeal).

Renault is mid-range of the compact SUV market with the Koleos and it comes with plenty of features that will make it very competitive in that market. The Koleos comes in two levels of trim with your choice of 4×2 or 4×4 and petrol or diesel engines.

“Renault has applied its high standards of safety, engineering and design, along with great value for money, to the SUV market and, as a result, the Koleos is an outstanding vehicle,” says Renault Managing Director, Rudi Koenig. “Customers can choose between 4×2 and 4×4, petrol and diesel with all models extremely well-equipped and, of course, safety that is second to none.”

International Pedigree
Launched in Europe in June, the Koleos is the first 4×4 crossover vehicle to be produced by Renault and will be sold in over 40 countries around the world.

The first truly ‘global’ product to emerge from the Renault-Nissan Alliance the Koleos was designed by Renault, developed by Nissan and is manufactured in Renault Samsung Motors’ Busan plant in Korea. The global durability testing programme included over 30,000km in Australia’s harsh northern climates. 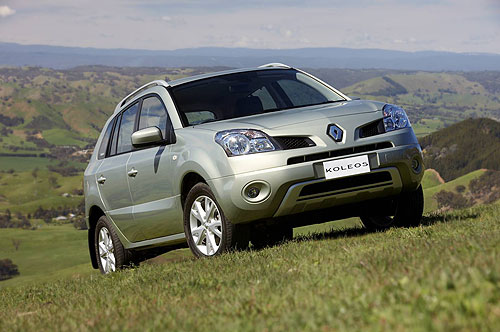 Exterior
Renault wanted the lines of the Koleos to be both distinctive and pleasing to the eye. The front-end of Koleos features the grille-mounted Renault logo flanked by air intakes and modern elliptical headlamps and the side aspect was designed to enhance its 4×4 calling and ruggedness.

Renault believes that “the arrow that flows from the rear lights along the car’s flanks to the front gives Koleos a particularly assertive character and the distinctive lines of its hatch form a movement that spills from the bottom of the rear window to converge on the rear logo which sits on a gloss black finish plaque”.

Rear access is via a split-opening, ‘clamshell’-type tailgate to assist cargo area access although those who have tried loading luggage over an open tailgate may beg to differ with the suggestion that it assists access to the cargo area. 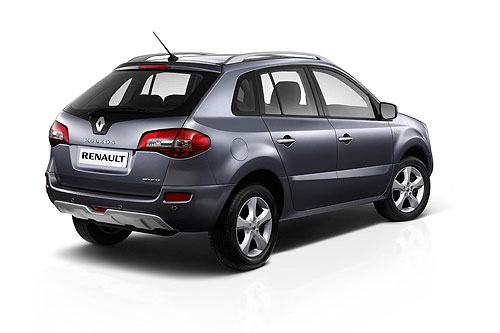 The upper part of the hatch permits access to the boot in cramped spaces and allows items of more than one metre wide to be carried. When lowered, the bottom part of the tailgate serves as a handy seat for two adults (up to 200kg).

The exterior differences between the entry-level Dynamique and top-of-the-range, Privilege, are subtle. Both models are fitted with 17” alloy wheels (with differing designs) and the Privilege is fitted with front and rear parking sensors as standard.

There are no styling, or badging, cues to differentiate between 4×2, 4×4, petrol or diesel models.

Interior
The driving comfort, noise levels and interior design of the Koleos interior set it apart from most compact SUV’s. 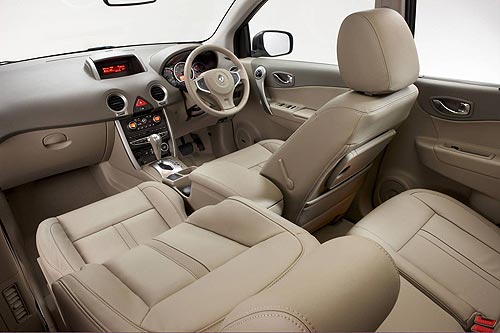 All controls fall easily to hand and the flowing dash design is finished in soft touch materials. A leather-wrapped steering wheel (height- and reach-adjustable) and gear shift is standard on all models. 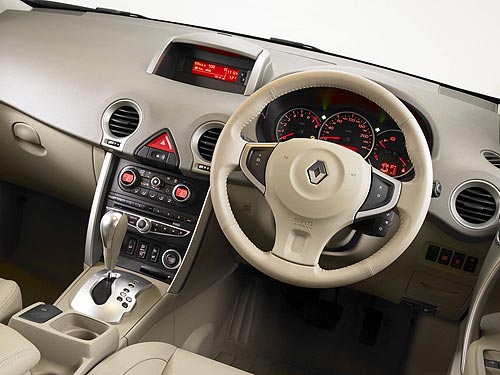 The comfort of rear seat passenger is enhanced by two, b-pillar mounted, air vents with fan speed controls located on the back of the centre console. Folding tables are also integrated in the back of the front seats.

The Privilege is trimmed in beige leather and fitted with heated front seats with electric controls for the driver. Perimeter entry is also standard.

The ‘Modularity Pack” (Standard on Privilege, optional on Dynamique) includes an ‘easy estate’ system which enables the 60/40-split rear bench seat to be folded away at the flick of a lever. The pack also includes a forward folding front seat back which allows items up to 2.6m long to be transported, adjustable incline on rear seat backs, a removable centre console insert, rear armrest storage and a 12-volt outlet in the cargo area.

In typical Renault fashion there are plenty of storage spots all around the cabin. The dashboard includes an air- chilled, 15-litre glovebox, while the storage space in the centre console is extremely large. Extra space is provided in a drawer located beneath the front passenger seat, door bins will take a 500ml bottle and the lidded stowage space incorporated in the armrest is ideal for CDs.

The Dynamique is equipped with a single CD, AM/FM audio system whilst the top-of-the-range Privilege is fitted Bose® developed audio system which comprises a digital amplifier, seven loudspeakers and a sub-woofer.

All Koleos models are fitted with an auxiliary audio input for MP3/iPod connections.

Particular attention has been paid to effective damping of both mechanical and road noise. Effective use of balancer shafts and a twin-mass flywheel damper has been made to minimise cabin intrusion from the diesel engine along with engine subframe filtering and soundproofing materials.

These solutions combine to give Koleos an extremely quiet cabin environment, especially on poor quality roads.

Safety For All
Koleos is fitted with the very latest active and passive safety features. ESP is standard on all models.

In emergency braking situations, drivers can count on ABS with electronic brakeforce distribution, emergency brake assist and ESP with understeer control. Even before the latter kicks in, the all-wheel drive transmission control system intervenes to adjust the front/rear torque split as soon as the first signs of oversteer or understeer are detected.

Koleos benefits from Renault’s long-standing work in real-life accident analysis. In terms of passive safety, its body structure features programmed crumple zones at the front and the back. The cabin was designed as a survival cell for passengers in the event of an accident.

Koleos is the tenth Renault model to be awarded a five-star EuroNCAP crash test ratings. Koleos comes with a long list of equipment committed to optimising occupant protection, including dual-front, dual-side and curtain airbags and load limiters for the front and rear seatbelts and front seatbelt pretensioners

Powertrains – 4×2 and 4×4
Koleos will be available in 4×2 petrol and 4×4 petrol and diesel powered variants. The 4×2 Dynamique is powered by the 2.5 litre petrol engine and is available with a 6-speed manual or CVT. 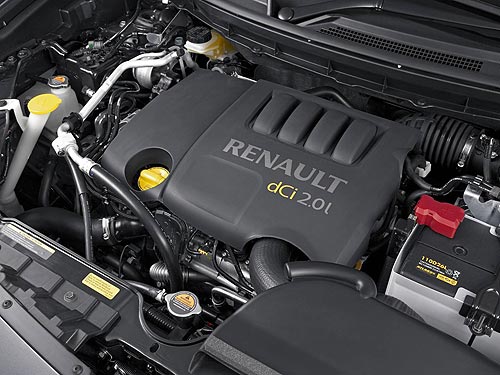 The 4×4 Dynamique is a powered by three engine/transmission combinations. The 2.5 litre petrol is fitted with a CVT and two variations of the 2.0 litre diesel engine are available. The 6-speed manual dCi is produces 127kW while the 6-speed adaptive automatic transmission is mated to a 110kW engine.

The top of line 4X4 Privilege is only available in petrol/CVT format.

The 2.0 litre diesel engine features the very latest diesel engine technologies, including piezoelectric injectors, common-rail 1,600-bar fuel injection, special-design pistons and a variable-geometry turbo which all combine to make this the most efficient four-cylinder diesel of its class.

In addition to the effortless performance offered by both engines fuel economy is equally impressive with the 2.0 litre dCi manual version returning a combined useage of 7.9 l/100km and the automatic 8.3 l/100km. CO2 emission for both models are 209 g/km and 221 g/km respectively.

The 2.5-litre Euro 4-compliant petrol engine which delivers peak power of 126kW at 6,000rpm and maximum torque of 226Nm at 4,400rpm. On the 4×2 Dynamique models the engine is paired with a manual six-speed gearbox or a continuously variable transmission (CVT). The 4×4 Privilege comes standard with CVT.

4x4i
Equally at home on all type of roads Koleos benefits from Nissan’s experience of all-wheel drive transmission.

The MacPherson-type front suspension combines with the fully-independent multilink rear suspension to deliver comfort and directional stability in all situations. Meanwhile, the dampers and springs have been tuned to match Koleos’ specific dimensions and contribute to the targeted balance between comfort and handling. The rear dampers are mounted at an angle in order to free up as much space as possible between the wheel wells (an extra 100mm compared with vertically mounted dampers).

In ‘auto’ mode, the electronically-controlled torque split between the front and rear is automatically calculated as a function of available grip.

In normal conditions, torque is delivered to the front wheels only. Should less grip become available, however, some of the torque is instantly diverted to the rear. In extreme conditions, up to 50 per cent of torque can be transferred to the back wheels in this way. For optimal pullaway from standstill however much grip is available, the system delivers engine toque to all four wheels.

This front-rear split is ensured by an electronic coupler and controlled by the latest-generation ‘All mode 4×4-i’ system developed by Nissan for X-Trail.

When grip is at a premium, such as on snow, mud, dirt or sand, the driver only has to flick a switch on the dashboard to electronically lock the transmission in 4×4 mode and thereby direct 50% of torque to the rear. The transmission can also be locked in front-wheel drive mode.

Koleos will also be available in permanent two-wheel drive form for those customers wanting crossover looks and packaging, but who have no call for all-wheel drive transmission.

Koleos is equipped with a Hill Start Assist function which can prove a particularly useful asset during everyday motoring. This system is automatically activated on gradients of more than 10 per cent to prevent the vehicle from slipping back down the slope. It also does away with the need for the driver to switch rapidly from the brake pedal to the accelerator pedal which is inherent in all other vehicles.

Similarly, Renault Koleos is equipped with a Hill Descent Control system for even safer off-road motoring. This function is activated via a switch on the central fascia and automatically holds the vehicle’s speed at a maximum of 7kmh on downhill gradients of 10 per cent or more without calling for use of the brakes. Particularly useful when Koleos is used off-road, this system also contributes to active safety since it allows the vehicle’s downhill speed to be controlled on steep, snowy or icy slopes. The function also works in reverse gear.

True to its ability and application all Koleos models are fitted with full-size, 17” alloy spare wheels.

Warranty
The Koleos comes with a three-year or 150,000km warranty.