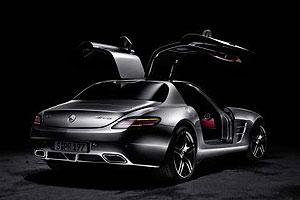 The new SLS AMG is to receive an internationally renowned design award, the “iF product design award 2010”.

The iF product design award was first presented in 1953, and ranks among the most important design awards. The 24-member jury chose 778 entries from around 2500 candidates in 16 categories; the SLS was up against numerous well-known competitors in the “Transportation Design” category.

“This sought-after award for the new SLS AMG is a great honour for us. It also reflects the extremely positive feedback on the design of the SLS that we have been receiving since the September world premiere at the International Motor Show (IAA) in Frankfurt/Main,” says Prof. Gorden Wagener, Head of Design at Mercedes-Benz.

All winners of the iF product design award are entitled to use the sought-after iF label for the entire lifecycle of the product receiving the award.

The award ceremony is traditionally held on the first day of the CeBIT fair in Hanover, Germany: on 2 March 2010 the winners of the iF gold awards for outstanding design performance will also be announced. From then on, the Mercedes-Benz SLS AMG will also be on display until August 2010 as part of a design exhibition which the organisers expect around 250,000 visitors from all over the world to attend.

There’s something about gullwing doors on a car that jsut appeals to me.