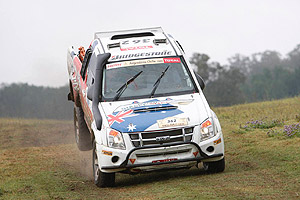 Dakar Rally officials have recognized the competitiveness of Australia’s star entry in next month’s 2010 event, moving the Bruce Garland / Harry Suzuki / Isuzu D-MAX combination up 42 places in the starting order compared to their spot last January.

The Aussie desert racing ace will start car 20 in a 142-car field, which puts him in the top tier of drivers who get a three minute on-road separation gap rather than the 30 seconds he suffered back in 62nd position a year ago.

“This will help a lot as we won’t have to battle so much the clouds of dust, huge ruts and general mayhem caused by the 12-tonne truck competitors mixing it with cars and bikes, plus getting around other car drivers who were unused to fighting through dust on narrow roads,” said Bruce Garland.

“Last time we fell back after the first day because of those elements so it’ll be good if we can make a cleaner break this time, especially with the extra acceleration and top speed we’ve got now, after extra tweaking of our still near-standard 3.0 litre turbo diesel engine. 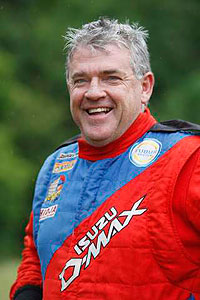 “Also, with the new route running in reverse to last time, some of the killer sand dune stages arrive much earlier in the event, so hopefully that’ll sort a few more runners out.
I just hope I’m not one of them as they’re pretty daunting, but the D-MAX is good in the dunes,” Garland added.

Garland is shooting for a top 10 finish when he tackles the famously long and tough Dakar Rally in South America starting January 1.

He and long-time co-driver Harry Suzuki were the surprise performers in the 2009 event, winning the amateur class and their D-MAX finishing first diesel ute, first production-chassis car and 11th out of 188 starters but now they’re aiming higher for 2010.

“We’re planning to be the first non-multi-million-dollar team home,” says Garland, who will pit his backyard-prepared Isuzu D-MAX diesel ute against the ‘Formula One’ machines from factory teams such as VW and BMW.

“Because I didn’t quite make the top 10 last year, I’m still classed as an ‘amateur’, so we want to be the first ‘amateur’ in the top 10, but we’re thinking deep inside the top 10.

The D-MAX Ute
Garland and his team have built a new Isuzu D-MAX 4×4 ute that was packed off to Argentina early November. It’s trading off a little of its legendary fuel economy (it used around half the fuel guzzled by the cars that headed him last year) with some extra tuning of its 3.0 litre turbo-diesel production engine over last year’s fairly mild upgrade.

It now has maximum torque up another 100Nm to 600Nm (66 percent up on standard) and an extra 20kW of power to peak at 180kW, 50 percent more than the road-going D-MAX, all feeding into its Australian-built Holinger five-speed sequential transmission. Its specs put it in Class T1.2, which is modified 4WD diesel.

“We think this engine will cope even better with the extreme weather conditions we’ll be facing and give us more top speed. We’ve also upgraded some other parts so they’ll deal better with the rugged terrain over there. It’s much rougher than outback Australia.”

Garland’s D-MAX will be one of two on the Dakar, teaming again with that of Swedish friends Pelle Wallentheim and co-driver Olle Ohlsson, who start 15 places behind them.

The Dakar
The Dakar is the world’s premier off-road competition, the 2010 event attracting 382 cars, motorbikes, trucks and quads from around the globe. It will be run from Argentina to Chile and back, from January 2 – 17. Four Aussie bikers are also competing in Dakar 2010.

Originally the Paris-Dakar and staged in Europe and North Africa since 1978, terrorist threats killed the 2008 event and organisers moved it to South America for 2009.

The Dakar is a 9,000km off-road endurance marathon, with competitive stages up to 500km of flat out driving often across trackless lands. It crosses the Andes at around 4,000m altitude and traverses river beds, saltpans, mudflats and kilometre-high Atacama dunes where it hasn’t rained for centuries.

The official start is on New Year’s Day in downtown Buenos Aires, where the spectator crowd is tipped to top the million-plus of last January as Argentina celebrates its bicentenary.

Doing the Dakar in a D-MAX Ute